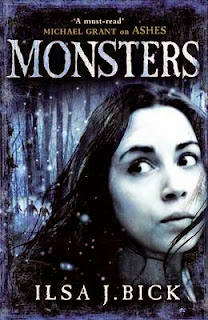 Other Titles by this Author: Ashes, Shadows, Drowning Instinct

From the ashes, monsters will rise.

Alex is tough. She has survived the EMP blast, she has lived among the flesh-eating Changed, and she has been separated from for months.

And she hasn’t given up.

But on the brink of starvation and in the grips of a winter that just won’t end. Alex discovers a new and terrible truth.

The Changed are still evolving. And...they’ve had help.

The terrifying conclusion to the Ashes trilogy.

The first book in this trilogy absolutely blew me away and I thoroughly enjoyed books two as well. Although I enjoyed the finale, I did feel a little less strongly about Monsters.

So much happens in each instalment of this series that the brief catch up with each character at the beginning of Monsters was essential. I think I would be completely lost otherwise. As I plowed through this novel I began to think that there was too much going on with too many characters to keep track of properly. The action is utterly relentless and every character I’d grown to care about was constantly in mortal danger and it became a little tiring. It was so expected for them to nearly die and then miraculously survive that I got to the point that I just wanted Tom, Alex and Ellie to be reunited and the novel to end. Especially as this continued for a mammoth 670; it was too long. Although there were no slow bits and there was nothing I would have cut, I do think it should have been split into two separate novels.

Even though I had issues with Monsters, I have to applaud Ilsa J Bick’s writing, ideas and story-telling. This trilogy is an epic undertaking. The whole idea behind the Zap causing the world to end and something to trigger in people who then become people-eating monsters is so original in a genre saturated with sameness. The presence of the monster grew from something abstract that affected the enemies of the characters into an entity in itself with an almost physical presence, wants and reactions. Alex’s character took on depths and lengths only made possible by the monster, in fact, even though it was killing her, it saved her life many times.

I have to admit that for most of Monsters I was just wishing for Alex and Tom to be reunited. As a couple in a YA series it was so, so weird for them to spend most of the trilogy apart. I almost couldn’t remember what they were like together so I didn't always connect with their respective feelings for each other. Strangely, I also grew fond of Wolf as Alex did. though he never spoke his human character came through so strongly that I part of me wanted him to go full circle.

Even though I didn’t love Monsters, Ilsa J Bick’s writing is beautiful and her story-telling is exquisite so she’s an auto-buy for me. I really hope her next novel, White Space, makes it over here.

Thanks to Quercus for sending me a copy for review.