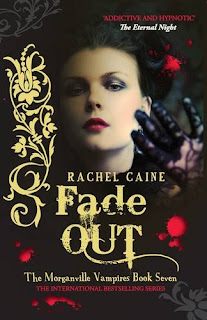 Fade Out: The Morganville Vampires - Rachel Caine
Pages: 345
Publisher: Alison and Busby
Release Date: 11th January 2010
Other Titles in the Series: Glass Houses (my review), The Dead Girls‘ Dance (my review), Midnight Alley (my review), Feast of Fools (my review), Lord of Misrule (my review), Carpe Corpus (my review)
Without the evil vampire Bishop ruling over the town of Morganville, the resident vampires have made major concessions to the human population. With their newfound freedom, Claire Danvers and her friends are almost starting to feel comfortable again…
Now Claire can actually concentrate on her studies, and her friend Eve joins the local theatre company. But when one of Eve’s cast mates goes missing after starting work on a short documentary, Eve suspects the worst. Claire and Eve soon realise that this film project, featuring the vampires themselves, is a whole lot bigger - and way more dangerous - than anyone suspected…
Oh, I do love The Morganville Vampires series! Fade Out was no exception.
After the ending of Carpe Corpus and all of the tied up plot lines it delivered, I was worried about how Rachel Caine would carry on Claire and the gang’s story in Fade Out. I really didn’t need to worry. There wasn’t very much action in the first half of the novel, but it didn’t feel slow and it was actually nice to see Claire, Shane, Michael and Eve in a semi-normal situation. Though in true Morganville style, the action and life threatening circumstances soon jumped back into the foreground.
The relationships between Claire and Shane and Michael and Ever are tried and tested in Fade Out. In fact, the dynamics betweens lots of the characters changed. some for the better, some for the worse. There was even a new character introduced; Kim. And I didn’t like her at all. Nor did many residents of Morganville.
I do have a problem with the Morganville series, though: it’s completely addictive. And because I love the books so much, I read them as soon as I get them and devour them far too quickly. Not even Rachel Caine’s ridiculously long chapters, sometimes up to fifty pages, can slow me down. I want this series to never end. I think I might have a problem…
After finishing Fade Out, I am, as ever, waiting impatiently for the next book in the series. Kiss of Death will be released in May
Sophie
Posted by So Many Books, So Little Time at 09:00
Email ThisBlogThis!Share to TwitterShare to FacebookShare to Pinterest