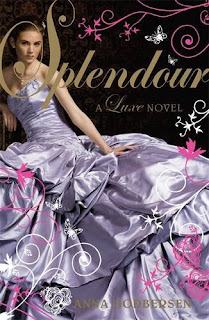 Splendour: A Luxe Novel - Anna Godbersen
Pages: 391
Publisher: Harper Collins
Release Date: 7th January 2010
Other Titles in this Series: The Luxe, Rumours, Envy (my review)
New York City, 1900
While the once revered Holland family recovers from scandal, the spirited Miss Diana Holland is seeking adventure abroad. But then a surprising clue about her father’s death is revealed and everything is thrown into question.
Meanwhile, the delectable Henry Schoonmaker has also left the city and bravely gone to war while his wife relishes her role as Manhattan royalty - until a real prince pays a visit and turns her fickle head.
As New York’s most dazzling stars chase dreams, cling to promises and tempt fate, society wonders: at exactly what price does a life of splendour come?
The gorgeous dresses, delicious scandal and sumptuous secrets of The Luxe series have enraptured me from beginning to end.
Anna Godbersen’s flowery and elegant prose is largely period appropriate and one of my favourite aspects of Splendour. It wraps you up and takes you to the tropical heat of Havana and the luxurious ballrooms of Manhattan. The old-fashioned feel of the novels was enhanced by the newspaper and book excerpts at the beginning of each chapter, detailing the lives of the New York socialites of 1900.
In some series the characters don’t grow or change as their stories move on. This is definitely not the case in The Luxe series and is especially evident in Splendour. Di is strong and independent, and still has the passion and impulsiveness that everyone loves her for. Elizabeth finally grew a backbone and Henry grew up. I think I loved him even more for that. I’ve cared about these characters for a while now and I’m quite sad that their stories have come to an end.
Even though I’ll miss Henry, Diana, Elizabeth and Teddy, that doesn’t mean that they didn’t make me want to scream at them at some points in Splendour! They made some very stupid and pretty annoying decisions that led to less than great situations. Needless to say, I didn’t get the ending that I wanted to one of my favourite series , but Anna Godbersen wrote an ending that suited her characters and, really, you can’t ask for more than that.
I loved every page of the frustrating and addictive Splendour and I’m looking forward to reading whatever Anna Godbersen writes next.
Sophie
Posted by So Many Books, So Little Time at 09:00
Email ThisBlogThis!Share to TwitterShare to FacebookShare to Pinterest