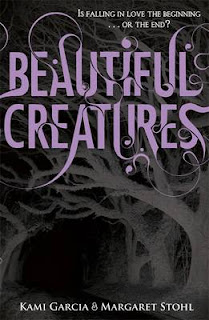 Beautiful Creatures - Kami Garcia and Margaret Stohl
Pages: 563
Publisher: Puffin
Release Date: 4th February 2010
In Ethan Wate’s hometown there lies the darkest of secrets…
There is a girl.
Slowly, she pulled the hood from her head…green eyes, black hair.
Lena Duchannes
There is a curse.
On the sixteenth moon, of the sixteenth year, the Book will take what it’s been promised.And no one can stop it.
In the end, there is a grave.
Lena and Ethan become bound together by a deep, powerful love. But Lena is cursed and, on her sixteenth birthday, her fate will be decided.
Ethan never even saw it coming.
Beautiful Creatures is a sprawling, Southern, epic tale of secrets, magic, mystery and love.
I adored this book. Kami Garcia and Margaret Stohl’s writing is beautiful. It’s softness and lyrical quality gave Beautiful Creatures a compelling, Gothic atmosphere that enhanced the air of history, enchantment and mystery of Gaitlin. The stifling claustrophobia of a small town was captured gorgeously with characters like Mrs Lincoln, Mrs Snow and Mrs Asher and the stories and rumours spreading through the town like wildfire.

The American Civil War played a significant role in the plot of Beautiful Creatures and I enjoyed re-learning all about it as I was around twelve when I studied it in History. I think I might actually remember something about it this time! The way that it entwined with Ethan and Lena’s story was effortless and it helped to introduce the mythology seamlessly. The mythology itself was completely new to me and unlike anything that I’ve read about before. It’s complex and intricate and was gradually revealed throughout the novel.
But my favourite aspect of Beautiful Creatures (besides Ethan!) is the bucketfuls of mystery. Nothing was ever disclosed in full; we were drip-fed titbits of information that I tried to piece together. Only once or twice did I guess correctly! All of this led to an explosive final few chapters where everything fell into place, mysteries were solved and some rather shocking events unfolded.
After turning the last page of Beautiful Creatures thinking only, ’Wow!’, I’m very excited to see how Ethan and Lena’s story continues in book two, Beautiful Darkness.
For my 2010 Debut Author Challenge, 2010 100+ Reading Challenge
Sophie
Posted by So Many Books, So Little Time at 09:00
Email ThisBlogThis!Share to TwitterShare to FacebookShare to Pinterest