Rachel Ward is a British author whose amazing first novel 'Numbers' was released by Chicken House in early January of this year. Rachel was kind to enough to answer a few questions for me. You can see my review for 'Numbers' here. 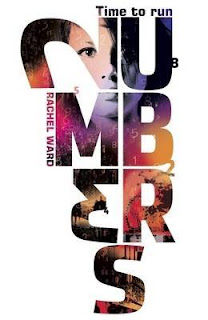 1. Tell us a bit about 'Numbers'.'
Numbers' is a thriller, but also a love story. The main character, Jem, is a fifteen-year-old girl who has a special gift (or curse?) - when she looks in someone's eyes, she can see the date of their death. She gets involved with a boy at school, Spider, even though she knows a secret about him: he only has a couple of months to live...
2. Who were your favourite authors as a teenager? Are they similar to those you like now?
I stopped reading fiction when I was a teenager, and only really started again in my twenties. In those days, there wasn't really teenage or young adult fiction, nothing to bridge the gap between children's and adult novels. Nowadays, I like reading contemporary fiction - Barbara Kingsolver, Anne Tyler, Nick Hornby, Rose Tremain, Philip Pullman, Theresa Breslin, and new writers like Catherine O'Flynn and Stef Penney.
3. If you were only allowed to take three books to a desert island, what would they be?
I love desert island questions! But it's really hard to choose. I might take Tove Jansson's 'The Summer Book' which is about spending the summer on an island, Stef Penney's 'The Tenderness of Wolves' and maybe, 'The Saga of Noggin the Nog' to remind me of my mum reading to me when I was little.
4. Do you have a particular place that you write or can you write anywhere?
I write anywhere. I do my best writing early in the day, before everyone else in my household is awake.
5. Seeing a person's death date is a concept I've never come across in a novel before. Where did you get the idea from?
I was interested in giving my main character a gift (like Lyra in 'Northern Lights') but in a really contemporary setting, someone at the bottom of the heap in the UK today. I also loved the US TV series 'Six Feet Under.' Each episode started with a death, and then the date of death would come up on screen. It made me think that there is a number out there that will apply to all of us. What difference would it make if we knew our numbers?
6. Is there any reason that you made Spider an unconventional hero or was it unintentional?
What a great question! I wanted to make Spider someone seemingly unlovable, so that Jem could be the one person who sees the good in him (as he sees the good in her). Actually, his nan sees the good in him, too, and she's one of my favourite characters.
7. You tackled some serious issues such as death, drug addiction and terrorism in 'Numbers'. Was this something that you set out to do when you began writing?
I wanted to write something quite edgy. I suppose I write about things that worry me. Certainly, I was thinking about mortality and the fear of losing friends or family, and I realised I wanted to tackle it head-on and try and work out what I thought about mortality. Actually, I ended up with the same attitude that I started with i.e. that life is a gift and you should treasure each day with friends and loved ones.
8. What are you working on at the moment?
I'm writing a sequel to 'Numbers.' I don't want to give too much away, but it takes the same concept as 'Numbers' and (hopefully) ratchets it up a level. I'm really excited about it, but writing it is quite a disturbing experience! It's due to be published in 2010.

Thank you Rachel for taking part in my first ever author interview. I can't wait to read the sequel to 'Numbers'. It is available in the UK and the US. I really do recommend it; it's brilliant!
Sophie
Posted by So Many Books, So Little Time at 16:15
Email ThisBlogThis!Share to TwitterShare to FacebookShare to Pinterest