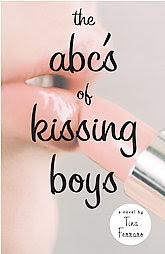 Pages: 215
Publisher: Delacorte Press
Release Date: 31st January 2009
Other Titles By This Author: Top Ten Uses for an Unworn Prom Dress, How to Hook a Hottie (my review)
Parker Stanhope has played soccer practically since she could walk. And now that she’s a high school junior, everything she’s worked for is finally coming together. She’s paid her dues on the field, and as an upperclassman she’s a shoo-in for the varsity team. Anyway, the coach moves everyone from JV up to varsity. It’s just what happens.
But that’s not what happens.
This year Coach Hartley moved up every JV but two - and one of those two is Parker.
Parker has spent her life being a team player, but as soon as school starts, she’s stuck with (horror or horrors) the freshmen, and her love of the game is seriously beginning to fall. Worse? Her friends her own age are cutting her loose, and now the freshmen kid across the street is the only one who’ll give her the time of day.
But Parker’s determined to get her life back. She has to get on the varsity team, and she has the perfect plan. The only catch? She has to trick her way into a place on the kissing booth at the school’s annual sports fair, then pull a stunt crazier than any she could ever dream up on her own. But the kiss has to look real. And Parker is less than experienced in playing that sort of field.
Parker knows that practice makes perfect. Now she just has to find the right coach…
This book was short, sweet and fun. I enjoyed it a lot more than I did How to Hook a Hottie but I don't know why.
I though the whole kissing booth scam was hilarious and absolutely brilliant. I mean, who would dream up something like that? Amazing! I also loved the way Parker got to know herself again and learned to like herself the way she really was and not as the person under Chrissandra's shadow and rule.
The whole mean girl clique bullying the rest of the girls with subtlety and evil was really well handled and will resonate with lots of secondary school girls who are on the receiving end of popular girl's bullying.
On a lighter note, the boys in this book were awesome. I loved Tristan. Apart from having a really cool name, he had a great sense of humour and was really sweet. Luke also really made me laugh and the way that the girls reacted around him was so realistic. Embarrassingly so!
This is definitely my favourite of Tina Ferraro's novels so far, although I've yet to read Top Ten Uses for an Unworn Prom Dress but I will do soon!
Have a great weekend everyone!
Sophie
Posted by So Many Books, So Little Time at 16:10
Email ThisBlogThis!Share to TwitterShare to FacebookShare to Pinterest