You Are So Undead To Me - Stacey Jay 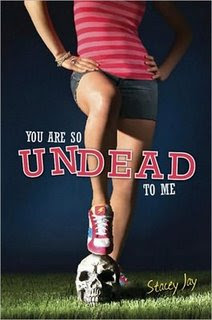 You Are So Undead To Me - Stacey Jay

Pages: 263
Publisher: Razorbill
Release Date: 22nd January 2009
Q: How many zombies does it take to ruin a social life?
A: Not many.
Megan Berry is a Zombie Settle by birth, which means she’s part-time shrink to a whole bunch of semi-dead people with killer issues. All Megan really wants is to go to homecoming, but when you’re trailed by a bunch of slobbering corpses whenever you leave the house, it’s kinda hard to score a date. Let’s just say Megan’s love life could use some major resuscitation.Megan’s convinced her life can’t get any worse - until someone in school starts using black magic to turn average, angst Undead into scary, hardcore flesh-eating Zombies. Now it’s up to Megan to stop the Zombie apocalypse. Her life - and more importantly, the homecoming dance - depends on it.
I really enjoyed this book. It was funny, cute and full of adventure. I really liked the take on the zombies and the chants to send them back to the grave after being councelled. The ending was also a really big surprise, I really didn't expect that person to be raisng the dead!
I will definitely look out for more of Stacey Jay's books in the future. In fact, I think there's going to be another Megan Berry book, I think it's called Undead Much and to be published next January. I certainly hope so anyway!
Sophie
Posted by So Many Books, So Little Time at 20:20
Email ThisBlogThis!Share to TwitterShare to FacebookShare to Pinterest