In My Mailbox VIII

I've borrowed the idea of this from the amazing The Story Siren who was inspired by Alea. If you want more information check out her blog. All summaries are from the book jackets.

Extreme Kissing - Luisa Plaja
Bethany is the sensible one with a long-term boyfriend, Carlota is the rebellious one with the wild past. All is fine in their world - except Carlota hates her step dad and longs for her ex. And Bethany is worried that her boyfriend is about to dump her - and she’s ‘late’…

Carlota has a plan to put their troubles behind them on a crazy day out in London. She uses her favourite magazine to guide them on a life-changing adventure - setting real challenges from the glossy pages that lead to exclusive shopping, exciting snogging and … explosive secrets.
The magazine will take them everywhere they need to go - but will it make them reveal the truths they are keeping from each other?
I loved Luisa’s first novel Split by a Kiss so I’m really looking forward to this one. I’m going to start it tonight. 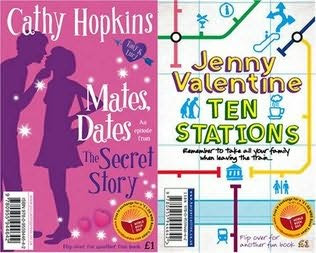 Ten Stations/Mates, Dates and the Secret Story - Jenny Valentine/Cathy Hopkins
Two books in one! Flip-sided book pairing two authors - our own award-winning Jenny Valentine, with Piccadilly's teen sensation Cathy Hopkins. TEN STATIONS Lucas and his sister Mercy have good intentions when they take their little brother Jed and forgetful grandad Norman on a day out in London. It's only ten stations - what could possibly go wrong? A real gem that will make you laugh and cry, featuring favourite characters from the award-winning novel FINDING VIOLET PARK. MATES DATES: THE SECRET STORY Tony has no idea that he is about to fall for the lively, elfin Lucy. But the course of true love never did run smooth -- and reading his side of the story as well as hers is an irresistible treat. At last - what the MATES DATES fans have been waiting for! A sneak peek at the into the full story of Tony and Lucy's romance -- told from both sides! (From Amazon)
A book for a pound and written by Jenny Valentine. I couldn’t not buy it really.

WAGS’ World: Playing the Game - Anonymous
Bling, Boys and (Gucci) bagfuls of glamour
Sixteen-year-old Amy Thornton can’t wait to spend the summer with her super-fit boyfriend, Damien Taylor, footballer of the moment. She’s left her life in Yorkshire behind and is ready for London. But her dreams of a blissful reunion are shattered when Damien spends all of his time out on the pitch and partying in nightclubs.
Soon Amy is surrounded by gossiping girls and friends who seem more like enemies. In this world of secrets and scandal, who can Amy trust?
Let the games begin.
I won this from a competition at Chicklish and it looks full of glamour and gossip. A complete guilty pleasure. 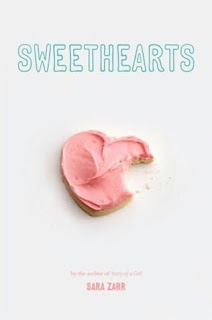 Sweethearts - Sara Zarr
As children, Jennifer Harris and Cameron Quick were both social outcasts. They were also each other’s only friend. so when Cameron disappeared without warning. Jennifer thought she’d lost the one person who could ever understand her. Now in high school, Jennifer has been transformed. Known as Jenna, she is popular, happy, and dating - everything “Jennifer” couldn’t be. But she still can’t shake the memory of her long-lost friend.
When Cameron suddenly reappears, they both are confronted with memories of their shared past and the drastically different paths their lives have taken.
I loved Story of a Girl so my hopes are high for this one. 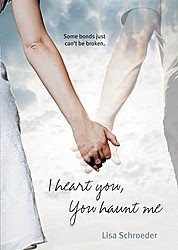 I Heart You, You Haunt Me - Lisa Schroeder
Girl meets boy.
Girl loses boy.
Girl gets boy back…
…sort of.
Ava can’t see or touch him,
unless she’s dreaming.
She can’t hear his voice,
except for the faint whispers in her mind.
Most would think she’s crazy, but she knows he’s here.
Jackson.
The boy Ava thought she’d spend the rest of her life with.
He’s back from the dead,
as proof that love truly knows no bounds.
This is so going to make me cry! 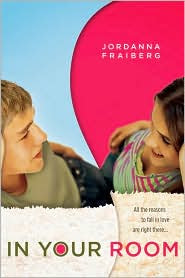 In Your Room - Jordanna Fraiberg
From: Molly
To: Celeste
Date: June 14, 2008 10:33pm
Subject: yoda-is that you?!
Celeste -FINALLY arrived. I’m sleeping in some boy’s room. Three words: STAR WARS SHEETS!!! HELP!! Can you send me mine (the white with the lilac trim)? And while you’re at my house find out is the boy staying in my room is cute or a crazy sci-fi freak. I want details!!!
- XOXO Molls
When their families randomly switch houses for the summer, retro-chic LA fashionista Molly Hill and laidback granola boy Charlie Richards find themselves living in totally unfamiliar rooms for two long hot months. Soon they become entwined in each other’s secrets, relationships and dreams. Day by day, they grow closer…even though they’re living 1,000 miles apart and have never met face-to-face.
Can perfect strangers be perfect for each other?
Will Molly and Charlie make it through a summer of seductions, missed connections and the thousand miles between them to find out?
This sounds so cute; perfect for the sunny weather we’re having at the moment. 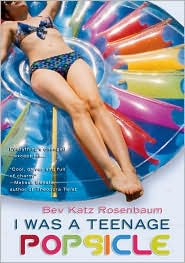 I Was a Teenage Popsicle - Bev Katz Rosenbaum
I, Floe Ryan, was frozen - well, “vitrified” - when I was sixteen years old. My parents and I had a rare disease, and it was our only option until they found a cure. Now I’ve been thawed, and guess what, it’s ten years in the future and I’m still a teenager. And my parents are still, shall we say, chilling out…
So now my little sister is my older sister, and payback’s a beyotch. She’s making me suffer for every snotty thing I ever did. Try getting used to that…not to mention a new school, new technology, and a zillion other new things that happened while I was napping in the freezer. Luckily, I have Taz. He’s the hottie skater boy who used to make me melt before I was frozen. He was a Popsicle too, so at least we get to reintegrate together. But now they’re trying to close the Venice Beach Cryonics Center - with my parents still in it! Now that’s cold. It’s up to me to save the clinic and my parents - so I can finally have a chance for a somewhat normal life…
This such a cool (no pun intended) idea. I can’t wait to see how it’s delivered.

Inkspell - Cornelia Funke
Let the imaginary become real…
Although a year has passed, not a day goes by without Meggie thinking of the extraordinary events of Inkheart, and the story whose characters strode out of the pages and changed her life for ever.
But for Dustfinger, the fire-eater, torn from his world of words, the need to return has become desperate. When he finds a crooked storyteller with the magical ability to read him back, he sets in motion a dangerous reversal that sees the characters of Inkheart transported to a charmed Inkworld, about to be fought over by rival rebels and princes.
I’m intrigued to see what happens to the crew from Inkheart, so I should enjoy this.

Glass Houses: The Morganville Vampires - Rachel Caine
Welcome to Morganville.
Just don’t stay out after dark.
Morganville is a small college town filled with unusual characters. But when the sun goes down, the bad come out. Because in Morganville, there is an evil that lurks in the darkest shadows - one that will spill out into the bright light of day.
For Claire Danvers, high school was hell, but college may be murder. It was bad enough that she got on the wrong side of Monica, the meanest of the school’s mean girls, but now she’s got three new roommates, who all have secrets of their own. And the biggest secret of all isn’t really a secret, except from Claire: Morganville is run by vampires, and they are hungry for fresh blood…
This was sent to me by the publishers, Alison and Busby, and I can’t wait to get stuck in. Plus, it has a glow-in-the-dark cover which is brilliant. 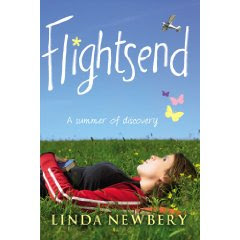 Flightsend - Linda Newbery
Flightsend is Charlie’s new home, whether she likes it or not. Her mother sees it as a chance for a fresh start.
Charlie’s certain that the move to a remote, ramshackle cottage will cause more problems than it solves. But she couldn’t be more wrong. Charlie’s first summer at Flightsend proves to be a turning point for both of them. It’s a summer of startling self-discovery, it’s a summer that Charlie will never forget.
This one was sent to me by it’s publisher Random House and I didn’t expect it at all, but it sounds great.
I had a really great week but it may be my best week for a while because I'm saving up. There might be a trip to California with my Psychology class and I so want to go and the only way I'm gonna be able to afford that is by cutting back on my book buying *cries*.
Have a great week everyone!
Sophie
Posted by So Many Books, So Little Time at 15:58
Email ThisBlogThis!Share to TwitterShare to FacebookShare to Pinterest