This was started by Jill over at Breaking the Spine. It tells everyone about the books that you are most looking forward to 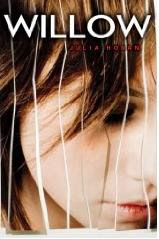 Seven months ago, on a rainy March night, sixteen year- old Willow’s parents died in a horrible car accident. Willow was driving. Now her older brother barely speaks to her, her new classmates know her as the killer orphan girl, and Willow is blocking the pain by secretly cutting herself. But when one boy —one sensitive, soulful boy—discovers Willow’s secret, it sparks an intense relationship that turns the “safe” world Willow has created for herself upside down.

Told in an extraordinary fresh voice, Willow is an unforgettable novel about one girl’s struggle to cope with tragedy, and one boy’s refusal to give up on her.

I've heard so many amazing things about this book that I can't wai to read it. I want it so much that I might even get it in hardback which is something I rarely ever do!

Posted by So Many Books, So Little Time at 10:42
Email ThisBlogThis!Share to TwitterShare to FacebookShare to Pinterest