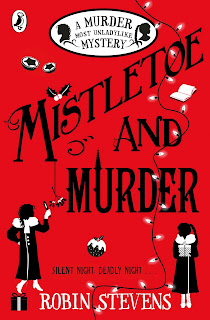 Daisy Wells and Hazel Wong are spending the Christmas hols in snowy Cambridge. Hazel has high hopes of its beautiful spires, cosy libraries and inviting tea rooms – but there is danger lurking in the dark stairwells of ancient Maudlin College.

Three nights before Christmas, there is a terrible accident. At least, it appears to be an accident – until the Detective Society look a little closer, and realise a murder has taken place. Faced with several irritating grown-ups and fierce competition from a rival agency, they must all use their cunning and courage to find the killer (in time for Christmas Day, of course).

I’m a huge fan of this series so the news of a Christmas instalment basically made me squeal with joy. And it was just as brilliant as I'd hoped!

Cambridge has always been a city I've wanted to visit and Hazel descriptions of the beautiful colleges, blankets of snow and steaming tearooms have made me desperate to visit. But I really loved the way Robin Stevens approached Hazel and Daisy’s experience there.

During their visit in 1935 women could attend the University of Cambridge but they couldn’t obtain a degree; female students often experienced discrimination in marks and grades and teenage girls? Completely under-estimated every time. I loved seeing the sexism exposed and feminist thought worked into the story so naturally and easily – there’s no way you can walk away from this series without that seed being planted.

The discussions of race were also taken up a level with the introduction of brothers George and Harold who have an Indian dad. I was reading Nikesh Shukla’s The Good Immigrant alongside reading this and they actually ended up complementing each other really nicely. It was really sad to see BAME writers talking about things they face in 2016 that Hazel and the twins were having to battle against in 1935.

I adore this series and I really felt like everyone and everything developed so much in Mistletoe and Murder. I feel like I could read about Daisy and Hazel (who is actually one of my favourite characters of all time) until they’re 80.