Holding up the Universe, Jennifer Niven 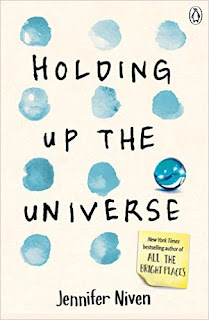 Other Titles by this Author: All the Bright Places

Everyone thinks they know Libby Strout, the girl once dubbed ‘America’s Fattest Teen’. But no one’s take the time to look past her weight and see who she really is. Since her mum’s death, she’s been picking up the pieces in the privacy of her own home, dealing with her heartbroken father and her own grief. Now, Libby’s ready: for high school, for new friends, for love, and for every possibility life has to offer.

Everyone thinks they know Jack Masselin too. Yes, he’s got swagger, but he’s also mastered the art of fitting in. What no one knows is that Jack has a secret: he can’t recognise faces. Even his own brothers are strangers to him. He’s the guy who can rebuild and reengineer anything, but he can't understand what's going on with the inner workings of his own brain. So he tells himself to play it cool.

Until he meets Libby. When the two get tangled up in a cruel high school game which lands them in group counselling, Libby and Jack and both angry, and then surprised. Because the more time they spend together, the less alone they feel.

I read and enjoyed Niven’s All the Bright Places last year, but as I read more and more about the way sufferers of mental illness felt about it made me re-evaluate how I felt about it. And then came the synopsis for Holding up the Universe and the shitstorm that came with it.

The synopsis alone made me nervous about the way Libby and her weight was handled in this book and I think I was right to be worried. I constantly felt on edge, like I was waiting to be offended, and generally uncomfortable. Libby was her weight, and when she wasn’t, it was ignored and traits were forced on her that felt meant to counteract the fact that she was fat. I just can’t think of a better way to describe the way I felt than uncomfortable; I didn’t enjoy much about it at all, even though it was quick and easy to read.

Even ignoring the discomfort, I found the POVs of Libby and Jack interchangeable – there was just no distinction in voice between them. I kept having to flip back to the chapter heading to figure out who I was reading from if I couldn’t work it out from what was going on. It honestly made me think back to All the Bright Places and want to re-visit it with a new perspective – I think those original reviews slamming it were probably right.

And I just have to say something about the ending, so if you don’t want to be spoiled, look away now. SERIOUSLY?! He has the severest case of prosopagnosia some experts have ever seen and yet he realises that Libby’s face is the only one he CAN see? COME ON. It was utterly ridiculous and it just ended up making me laugh with incredulity.

Once I managed to ignore the discomfort and interchangeable POVs, Holding up the Universe was an okay read. It was quick, easy and fun. I just worry about what ideas it’s perpetuating. If you want to read about a big girl that’s not held back by her weight, read Julie Murphy’s Dumplin’ – it’s glorious.

Thanks to Penguin and NetGalley for the review copy.