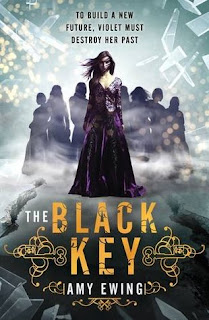 Other Titles by this Author: The Jewel, The White Rose

Violet and the Society of the Black Key are preparing to launch an attack on the royalty, and Violet has a crucial role to play. She must lead the surrogates as they infiltrate the Auction and break down the walls of the Lone City. But with her sister, Hazel, imprisoned in the palace of the Lake, Violet is torn. In order to save her sister, she must abandon her cause and her friends and return to the Jewel.

I’m a huge fan of this dystopian trilogy and I was so excited to see how it all wrapped up for Violet and the rest of the rebels.

When we pick back up with Violet, she’s agonising over her sister being in the clutches of the Duchess of the Lake and she decides to infiltrate the palace herself to protect her. I was expecting this move to come with a boatload of drama and horrible tension, but I found that it all actually sizzled along quite quietly. I usually race through these books but I never found myself dying to get back to this one which was a shame.

There was a sad lack of Ash in The Black Key, but a lovely dose of Lucien which was lovely. His position of straddling the two worlds is fascinating and I could easily read a whole series about him! I actually think there are a lot of side characters in the Lone City trilogy that are so strong and so well-developed that they could carry their own stories – but especially Lucien, Ash, Sil and Raven.

Just as with the other two books in the series, the harsh reality of this world and the way that the poor and women are treated in this society hit home. It feels like a scarily plausible possibility (if there was magic, obvs) and I love the way dystopia can hammer home and highlight the dystopian things going on in the very real world at the moment.

The Black Key was a tad anti-climactic, but I’m still really happy with how this story wrapped up and I’d really love for Amy Ewing to go back to this world in the future for a bit of a catch-up – there’s still a lot more to be explored.