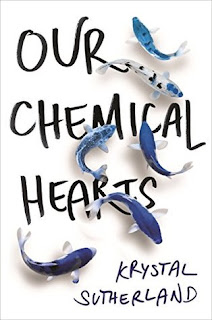 Henry page, a hopeless romantic and film buff, is smitten as soon as Grace Town walks into the classroom. But Grace – who looks in need of a good bath, is dressed in guy’s clothing, and walks with a cane – is unlike any leading lady he’s ever obsessed over. And when Henry and Grace are both offered positions as editors of their high school newspaper, the mystery of Grace begins to captivate him. Why does she visit a graveyard every afternoon? What secret does she keep locked up in her bedroom? Above all, why is Grace Town so deeply sad? Before he knows it, Henry is sure that he is the one to unlock his happiness. But Grace is capricious, changeable, infuriating, and, above all, damaged. Henry will need to be the strongest he has ever been to survive this particular love story.

I'd heard nothing but good things about Our Chemical Hearts but still went in with reasonably low expectations, and while I actually ended up enjoying a fair bit of it, I also had a fair few problems.

Starting with the good stuff, I really loved Krystal Sutherland’s writing style. It’s beautiful, poetic, witty and young – it’s very engaging and it made for easy and quick reading. Henry is a great narrator. He’s dramatic and funny and a sweet guy, but nowhere near perfect which is lovely. I was cheering him on but also a bit exasperated by him – in an affectionate way.

Grace, however, I had issues with. She’s grieving in an intense, painful and debilitating way and I felt for her, I really did, but I also found it incredibly frustrating. The way she grieved felt like a luxury to me – she could let everything go, think of nothing but herself and wallow in her misery. I think that was jealousy on my part, but it made me hate her, especially in the way she allowed her pain to excuse being a horrible person and treat Henry the way she did.

There was a lot in Our Chemical Hearts about how Grace inverted the whole idea of the Manic Pixie Dream Girl but I really don’t agree with that. Grace is a character who Henry has a ‘relationship’ with and teaches him a new way to look at the world and how different his little bubble of world and ideas of love might be unrealistic. She was basically an unwashed version of Margo from Paper Towns and I found it impossible to connect or empathise with her. The whole novel had a bit of the John Green about it to be honest.

But that wasn’t my biggest issue. It was how Grace’s limp and use of a cane was treated that really got my back up. This is from one of the synopses online:

And this is from the book itself, only a few pages in:

It’s ableism, pure and simple. It made me incredibly angry and it wasn’t a situation where it was a misconception that Henry had which was then turned on its head as he learned better blah blah blah. That could have been acceptable, but this wasn’t.

Our Chemical Hearts had SO much promise and I'd really hoped that it could have surpassed my expectations. I did love Krystal Sutherland’s writing style though so I’m willing to give her another shot.

Thanks to Hot Key Books and NetGalley for the review copy.