The Road to Ever After, Moira Young 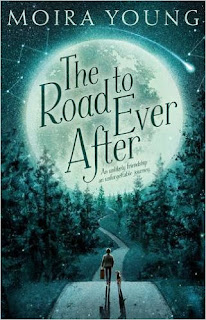 Davy David, an orphan, lives by his wits in the dead-end town of Brownvale. When a stray dog called George turns Davy’s life upside down just before Christmas, he sets in motion a chain of events which forces them to flee. A mischievous wind blows the two of them to a boarded-up mansion on the outskirts of town where they meet the elderly recluse, Miss Flint. She has planned one last adventure before her time is up and hires the reluctant Davy and George to escort her.

A magical adventure about an unlikely friendship and an unforgettable journey.

I'm a huge fan of Moira Young’s Dustlands trilogy – it’s one of my very favourite series’ – so I was really excited to read her first novel after that, and I was actually a little disappointed.

This magical adventure is the perfect read for tweens and kids in the run up to Christmas. I wasn’t expecting it to be such strong magical realism and I really liked that aspect of the story. I never find magical realism quite as convincing without beautiful writing to back it up and Moira Young has that in spades. It's enchanting.

I loved the idea of the story and the themes and the feel of the book, but I just didn’t connect with it fully. I think it was because I was holding onto Saba and her world from the Dustlands and part of me was expecting a book that was vaguely similar, but it was really nothing like it at all. It was definitely a case of ‘it’s not you, it’s me’ with The Road to Ever After and I’m really quite sad about it – I wanted to love this book.

The Road to Ever After is a magical story about friendship and making the most of what you’ve got, but it missed the mark a little for me.