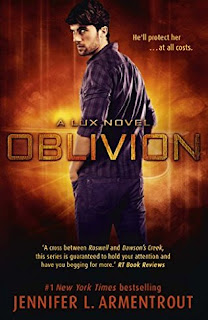 I knew the moment Katy Swartz moved in next door, there was going to be trouble. Lots of it. And trouble’s the last thing I need, since I’m not exactly from around. My people arrived on Earth from Lux, a planet thirteen billion light years away. Plus, if there’s one thing I know, it’s that humans can't be trusted. We can do thing they only dream about, and honestly, we make them look weak as hell. ‘Cuz they are.

But Kat is getting to me in ways no one else has, and I can't stop wanting her – or wanting to use my powers to protect her. She makes me weak, and I’m the strongest of our kind, tasked with protecting us all. So this one simple girl…she can mean the end of us. Because the Luxen have an even bigger enemy – the Arum, and I need to stay on my game.

Falling for Katy – a human – won't just place her in danger. It could get us all killed, and that’s one thing I won't ever let happen…

The Lux series was one I binged in a week when I wasn’t feeling great and I became a little addicted, even if I had some issues with it. The same happened with Oblivion. Being in Daemon’s point of view, the sexism and misogyny that rubbed up the wrong way in the early Lux books was even stronger this time around. He’s so arrogant and it's not even in a charming way! He got on my nerves for at least the first third of his version of Obsidian with how vile he is to Katy, even to ‘keep her safe’. Oh yeah, and Oblivion is actually Obsidian, Onyx AND Opal in Daemon’s point of view! I had thought it was just book one so I was pretty chuffed considering it only cost me 99p on Kindle!

It had been around two years since I read this series so I was able to go into Oblivion with a fairly blank slate; I only really remembered the huge plot points from each novel, though I recognised everything as it came up. I actually really enjoyed being back in the world. It’s nice to revisit an old story from a new angle, especially considering how much we didn’t know about Daemon and what was going on with him and the others for a large part of Obsidian.

Once again, mixed feelings about a Jennifer L Armentrout book, and once again, I devoured it in two days. I’m just going to go with it and hope that we get Origin and Opposition in Daemon’s POV too as, against my better judgement, I do have a huge crush on him…