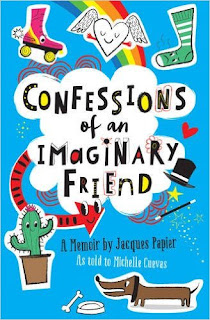 Jacques Papier thinks that everyone hates him.

After all, teachers ignore him when he raises his hand, nobody ever picks him for sports teams, and his sister, Fleur, keeps having to remind their parents to set a place for him at the dinner table.

But then Jacques discovers an uncomfortable truth: He is NOT Fleur’s brother, he’s her imaginary friend!

As so begins Jacques’ quest for identity…what do you do when you realise that the only reason you exist is because of someone else’s imagination?

Though Confessions of an Imaginary Friend is short, it makes up for it with heaps of sweetness and thoughtfulness.

First of all, I just love the premise of this. An imaginary friend who doesn’t know he’s imaginary and trying to figure out his place in the world – brilliant. Jacques Papier is a wonderful narrator to bring some complex ideas to the table for younger readers. This novel is actually aimed at a much younger audience that I realised and that I would normally read, but I still enjoyed it.

I really enjoyed seeing how Jacques reflecting on himself translated to Fleur, the girl who he thought was his sister, but is actually the one who imagined him. As Jacques battles with his invisibility and whether he’s real, even though Fleur can see him and he knows other imaginary friends from the support group and department that looks after them all, Fleur begins to think that she’s invisible too. It was very bittersweet.

Confessions of an Imaginary Friend is a sweet and sad exploration of identity and finding your place in the world that will delight kids, and their parents.