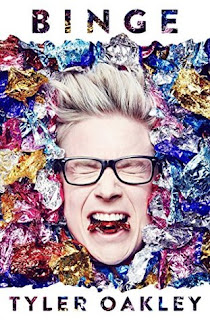 From someone who made a career out of over-sharing on the internet, Tyler Oakley has a shocking number of personal mishaps and shenanigans to reveal in his first book: he experienced a legitimate rage blackout in a Cheesecake Factory; he had a fashion stand-off with the White House secret service; he crashed a car in front of his entire high school while wearing his fast food restaurant server’s uniform; he projectile vomited while bartering with a grandmother.

With millions of fans clamouring for more Tyler Oakley, he delivers his best untold, hilariously side-splitting moments with trademark flair in Binge.

I’m a big fan of Tyler Oakley, and though I haven’t watched his most recent videos, I love his videos too so I was eager to read more about him. And I did learn more about him, sometimes a little too much, but the way Binge was formatted just seemed so very strange. Tyler’s anecdotes and stories and lists that feature in this book have no real order. They’re not chronological and they’re not divided into sections so it felt a little like whiplash. We were thrown from topic to topic, shock to shock and then back again later in the book. It felt like it hadn’t even been passed through structural edits!

Tyler talks a lot about his career and rise to fame on YouTube. He discusses the highlights, of course, but puts a lot of focus on the not so great side of being a YouTube celebrity which was fascinating. The imposition of fans on his life, the stress of all he’s being asked to do, the fear of backlash from fandoms – it’s not something that I imagine is considered very much, even though being a YouTube celebrity is something that lots of people aspire to be now. Tyler was brutally honest about his bad experiences with the One Direction fandom (and the boys themselves) and fans going to unsafe lengths to spot him and invading his personal time but he never insulted anyone or condemned them too harshly; he just shared his experiences.

YouTube and career experience weren’t the only things Tyler shared, however. There is a lot of very personal stuff discussed in Binge and I applaud Tyler for being brave enough to reveal it. He discussed his battles with an eating disorder, coming out, parental divorce, an abusive relationship and horrific break-ups. I can't imagine how reassuring it must be for people suffering or experiencing some of the things Tyler mentioned in Binge and knowing that Tyler Oakley went through the same thing and came out of the other end. That’s going to be invaluable for so many people and that alone makes this book important.

I'm very glad I read Binge, even though I would personally like to restructure the entire thing, and I have even more respect for Tyler Oakley as a person as well as a creator than I did before.