The very lovely Alexia Casale, author of The Bone Dragon and House of Windows, is going to be sharing her love for Persuasion today! I have to say that it’s my favourite too. 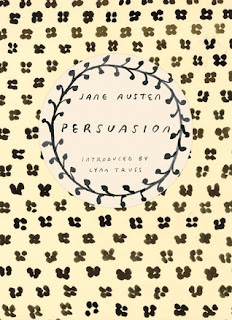 Persuasion, Austen’s last novel, was completed just before her death – indeed, although she died in late 1817, the manuscript is dated 1818, presumably to mark when she expected to have finished revising the manuscript. She never got the chance and many critics view Persuasion as her least polished work, but I’d argue that it’s by far her most sophisticated and accomplished. A short book, there is little ‘slack’ and few points where the story drags – a marked difference from most of her other work. Her development as a writer shines through and at every level there is a sense of maturity, not just of style but of concept and conception of the world and how it works.

Is Persuasion Austen’s most mature work because the protagonist, Anne, is also the oldest? Or is it that Austen is finally ready and able to write about a woman, not just girls – young adults in or just past their teens. Anne is old enough to have regrets. These regrets hinge on the fact that, as a young woman, she allowed her family and friends to persuade her not to marry the man she loved. The story follows her as she finds her way back to ‘the path not taken’, to second changes and finally to happiness. But it’s also the story of a woman who has lived and learnt enough to know who she is and what she wants. It is this sense of self that drives Anne’s growing agency as she finally learns how to negotiate the demands of the relationships in her life so that others do not dictate her path.

In Anne, Austen shows a woman who has become independent in her own mind. And it is in the context of this independence that she embarks on marriage, begging the question whether Anne would have been happy if she’d married Captain Wentworth as a girl. If she had maybe, instead of being governed by her father and godmother, she would have been governed by her husband. And what of Captain Wentworth? Did Anne’s refusal as a girl drive his subsequent success? During the interim, he too has become an independent man: sure of himself with a career and financial security. Here are two people who know who they are and can consent to marry each other in a different way to the other couples in Austen’s oeuvre. This marriage is not just chosen: it is chosen freely and on an informed, mature basis.

In this light, is it any surprise that Persuasion shows more happily married couples (the Harvilles, the Crofts and the Musgroves) than in any of Austen’s other works? In the case of the Crofts’ marriage, there are interesting elements of role reversal that show marriage as a partnership. It’s also in Persuasion that we see the only example of a married couple (the Musgroves) calling each other by their first names. All other wives call their husbands by their title and surname, adding endearments sometimes but still reinforcing the difference in their status. There is a nascent recognition that happy marriages are those in which there is greater equality.

Austen never married and there is a sense that Persuasion is a journey that reconciles her own decisions, regrets and also hopes as a woman who also has lived and learned enough to know what she wants. For all these reasons, it’s far and away my favourite of Austen’s books.