Mini-Reviews: The Amazing Book is Not on Fire, The Well of Ascension and Orange is the New Black 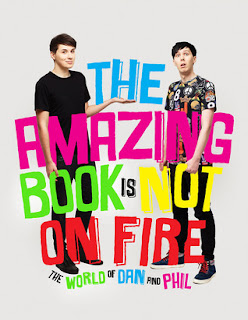 The Amazing Book is Not on Fire, Dan Howell and Phil Lester
224|Ebury Press|8th October 2015

In this book is a world. A world created by two awkward guys who share their lives on the internet!

We are Dan and Phil and we invite you on a journey inside our minds! From the stories of our actual births, to exploring Phil’s teenage diary and all the reasons why Dan’s a fail. Learn how to draw the perfect cat whiskers, get advice on how to make YouTube videos and discover which of our dining chair represents you emotionally. With everything from what we text each other, to the time we met One Direction and what really happened in Vegas…

This is The Amazing Book is Not on Fire!

Review
I love watching Dan and Phil’s videos so I bought this out of curiosity, and a love of their faces.

The Amazing Book is Not on Fire is a visual treat. Full colour photos, copies of images, illustrations, quizzes and exclusive stories. Weirdly, I actually couldn’t stop thinking about how much this must have cost to produce! And taking into consideration the video the guys made about the journey, the level of involvement they had with the production and all of the design details is insane. As much as I love Dan and Phil, and know how well this will sell, I couldn’t help but feel for many wonderful, talented authors who have to go down the traditional route.

I sometimes felt a little old for this book, but I ended up really enjoying it. The same fun, banter, comedy levels and affection between Dan and Phil that you see in their videos is here in the book, in their interactions as well as in their own narrated stories. I’m really glad their personalities were retained. As well as the telling stories, dishing on their pre-YouTube lives, describing their rise to fame and delving behind some of the biggest fan moments in their careers. I was impressed by the level of original content: quizzes, their texts to each other, a Dan and Phil manga, fan fiction written by them and unseen photos.

The Amazing Book is Not on Fire is lots of fun and it’s going to be a serious hit with Dan and Phil fans – it’ll be a firm favourite on Christmas lists this year. 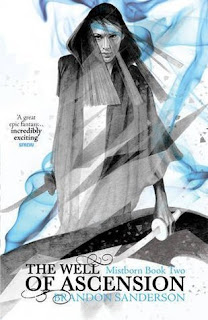 Synopsis
The impossible has happened. The Lord Ruler is dead. But so too is Kelsier, the man who masterminded the triumph. The awesome task of rebuilding the world has been left to his protégé Vin; a one-time street urchin, now the most powerful Mistborn in the land.

Worryingly for her, Vin has become the focus of a new religion, a development that leaves her intensely uneasy. More worryingly still, the mists have become unpredictable since the Lord Ruler did and a strange vaporous entity is stalking Vin.

As the siege of Luthadel intensifies, the ancient legend of the Well of Ascension offers the only glimmer of hope. Nut no-one knows where it is or what it can do…

Review
After falling in love with The Final Empire, I knew it wouldn’t be long until I found myself back in Luthadel with Vin and Elend to see the aftermath of taking the city from the Lord Ruler. I just had to work myself up to the task of the 29 hour audiobook!

I fell straight back into the Mistborn world with ease even though everything has changed drastically in the year since the ending of book one. Elend is King, Vin is his right-hand and bodyguard, Luthadel is governed by an Assembly and the city is surrounded by waiting armies. There is a LOT going on in this book but it was still easy to keep track of everything and everyone even as new and important characters were introduced. The only thing I couldn’t keep straight? Who to trust!

There’s a whole host of betrayal, switching sides and ambiguous loyalties in The Well of Ascension and it should make for a tense, suspenseful read, but I don’t think a 763 page book can really be those things! I found that this suffered a little from Second Book Syndrome and lagged for a large proportion of the middle chunk of the novel unfortunately. It didn’t affect my reading too badly, however, as I listened to the audiobook which helped me over the hump. But once the final battles kicked in and Vin and Elend make a dramatic decision, I was fully back on board and eager to discover the fate of Luthadel.

Though The Well of Ascension lagged a little in the middle, I still thoroughly enjoyed it and I’m gearing up to dive into Hero of Ages. 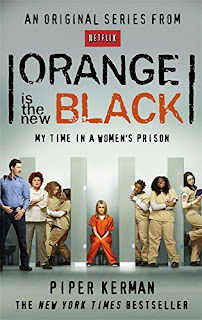 Synopsis
With her career, live-in boyfriend and loving family, Piper Kerman barely resembles the rebellious young woman who got mixed up with drug runners and delivered a suitcase of money to Europe over a decade ago. But when she least expects it, her reckless past catches up with her; convicted and sentenced to fifteen months at an infamous women’s prison in Connecticut, Piper becomes inmate #11187-424. From her first strip-search to her final release, she learns to navigate this strange world with its arbitrary rules and codes, its unpredictable, even dangerous relationships. She meets women from all walks of life, who surprise her with tokens of generosity, hard truths and simple acts of acceptance. Now an original comedy-drama series from Netflix, Piper’s story is a fascinating, heartbreaking and often hilarious insight into life on the inside.

Review
I love, love, love Netflix’s Orange is the New Black so as soon as I saw the original memoir pop up as a daily deal on Audible I snapped it up. And I'm so glad I did!

I was really surprised by how loyal the show is to the book. Listening to this I recognised so many of the most beloved characters (with different names), some of biggest moments from the show (missing screwdriver, peeing outside the cubicle, Pennastucky’s new teeth, Sophia being denied her hormones) and the awareness of sexuality, gender, social class. The book also had the same comedy-drama tone which made it very difficult to stop listening too! Piper Kerman’s narrative is so intelligent and engaging.

It blew me away how much Piper ended up learning about prison and the legal system during her experience. She spent six years working with the courts and police before she received her sentence. Six. I actually found all of this info really interesting. Since the 80s, the US has had standard sentences for drugs and Piper really discussed this and the often ridiculous nature of locking away women for years for a non-violent drug crime when so many other forms of rehabilitation would have been productive, effective and much cheaper for the government. I'd be interested to see if there are such standards in the UK, actually.

Like with the show, my favourite element of Orange is the New Black is the women themselves. I loved hearing about the support system they became for each other: lending Piper necessities at the beginning of her stay while she couldn’t buy anything from the commissary, becoming friends, Piper helping the other women writing letters and assignments. Piper says a few times that the biggest piece of advice she was given was to keep her head down and keep to herself, but she couldn’t have survived her sentence without the women around her. I love that such a strong comradery, support system and friendships were built under such conditions and between women that would never meet in the real world.

I loved Orange is the New Black and I highly recommend picking this up during the agonising wait for season four – it’ll hit the spot perfectly.