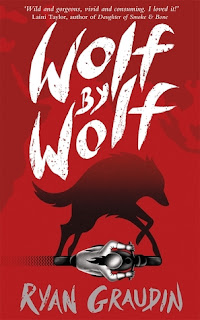 Other Titles by this Author: The Walled City

Once upon a different time, there was a girl who lived in a kingdom of death. Wolves howled up her arm. A whole pack of them – made of tattoo ink and pain, memory and loss. It was the only thing about her that ever stayed the same.

Germany, 1956. Over ten years since the Nazis won the war.

Seventeen-year-old Yael is part of the resistance, and she has just one mission: to kill Hitler.

But first she’s got to get close enough to him to do it.

A captivating and unforgettable story from The Walled City author, Ryan Graudin.

Even though lots of my friends have said Wolf by Wolf is one of their favourite books of the year, I was a still a little hesitant to read it, but I'm glad I did.

I don’t like reading about wars, but particularly WWI and WWII – I think my brain has been oversaturated with them at school. I'm sure we studied WWII at least four times? So Wolf by Wolf being an alternate history set in 1956 where Hitler and Axis won the war and the Nazi regime is still going strong, I wasn’t sure if my curiosity would be enough to make me want to read it. Luckily for me, it was the November Illumicrate box so I had no excuse but to give it a go!

The whole premise behind this novel is fascinating. The ramifications of Hitler taking over Europe and spreading into Asia, while the US standing by and declaring no sides, is a terrifying idea, and one that doesn’t feel too impossible with the way of the world at the moment. All of the horrors we’ve learned about in classrooms for the last 70 are still going strong in Yael’s world and she's one of the persecuted. The cruel experiments carried out on prisoners are famed, and without the end of the war, they carried on and got more and more terrifying, and Yael’s has developed the ability to skin shift. It saved her life over and over again and helped the resistance beyond measure, and know she’ll be putting it to the ultimate test.

The motorbike race from Germania to Tokyo is a test of endurance, strength, skill and the ability to survive, and though Yael’s journey was fraught with danger from the sabotage of other contestants, the drama of someone doing everything in his power to protect her and the fear of not succeeding in her task to kill Hitler at the victory ball, I rarely felt the desire to pick up Wolf by Wolf. I was fascinated by the premise, I thought that Yael and her backstory were really well-drawn and interesting, Ryan Graudin has some really beautiful turns of phrase, and yet I didn’t feel anything. Until the final 100 pages.

I was blown away by the last quarter of Wolf by Wolf. Yael had come to the last section of the race and the tension was insane. Sabotage, danger, emotional manipulation and fear flooded the final pages and at 10 pages from the end, I legit had to put the book down for ten minutes to get my sh*t together before I carried on. It was almost painful tension and I honestly couldn’t tell you the last time a book had such a visceral effect on me. And in those last few pages, I was so shocked by what happened that I immediately looked to see if there was a release date for the sequel yet (sadly not). The ending completely turned this book around for me and left me wondering that maybe I was just in the wrong mood for the first 280 pages?

Wolf by Wolf is an alternate history that you won't forget: clever, unexpected and terrifying real.