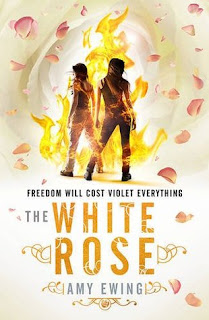 Other Titles by this Author: The Jewel

Violet, Ash and Raven has escaped the Jewel, but nowhere will be safe until the royalty is destroyed.

If she can reach the White Rose, Violet may be able to rescue more surrogates. But for one surrogate it is already too late: Raven is pregnant, and that is a death sentence.

Though lots of people had problems with the first book in the Lone City trilogy, I loved The Jewel and felt exactly the same about The White Rose.

One of my favourite things about book one was the dystopian world that Ewing created. A city divided into rings of wealth and prosperity, centring on the royal ring of the Jewel who buy surrogate girls at auction to provide them with heirs as they can't reproduce. It’s a fascinating dynamic of power, class and the treatment of women as second-class citizens, but also as the ones calling the shots. I was really glad that the world was expanded in The White Rose.

As Violet, Ash and Raven escape, which actually happens a good few chapters into the novel rather than in the first book as the synopsis suggests, they get to travel through some other rings of the Lone City. It was really interesting to see the effects of the royalty’s oppression and greed on the middle classes and the poor, the shocking difference between what Violet experienced in the Jewel and outside of it, and also the sheer volume of people completely fed up of it. I loved the feelings of revolution and the variety of people from different situations and places in the City. The second book in a trilogy, especially a dystopian trilogy where the revolution is building, a whole new cast of characters are introduced and that all taking place in a new setting, can really feel like a filler and a bridge to the final book, but The White Rose didn’t at all.

Everything Violet thought she knew about the truth of being a surrogate and the power of the auguries changed in this book. I always love it when the oppressed heroine comes out on top with hidden powers/strength/knowledge or whatever, but I liked that Amy Ewing twisted even further with Violet. It wasn’t just that her power was greater than she thought, it was a different power entirely and she suddenly had to learn about what that meant and how to use them. It was refreshing and gave the novel a focus while still setting up everything we’ll need for the finale.

But Violet wasn’t the only character we got to see evolve: Garnet became a hero in his own right. He helped with the escape, realised how invisible everyone but the royalty had been to him before and opened his eyes to what had been going on under his nose his whole life. We also got some more (heartbreaking) backstory from the mysterious lady-in-waiting Lucien and I’m really hoping there’s more to come in the final book, but it was Ash whose story really came to the forefront for me. The life of a companion, especially those who work in the royal palaces, seems to have tinges of glamour in The Jewel, but as Violet, Raven and Ash travelled to safety in The White Rose, the truth came out about Ash’s profession. The horrors of being bought and sold into it, the way the companions are trained, the reality of doing everything they do day in day out and the fact that they are treated as the lowest of the low by everybody – they are just as disposable as the surrogates – really came to light. My heart broke for Ash, especially as Raven’s strange new talents exposed how his experiences as a companion really made him feel about himself.

I thoroughly enjoyed The White Rose. This strong second instalment is filled with essential character growth, heart-pounding action and a cruel cliffhanger. I can't wait for the finale.