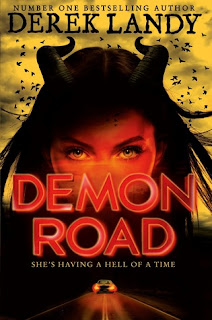 Other Titles by this Author: Skulduggery Pleasant, Playing With Fire, The Faceless Ones, Dark Days, Mortal Coil, Death Bringer, Kingdom of the Wicked, Last Stand of Dead Men, The Dying of the Light

For anyone who ever thought their parents were monsters…

Amber Lamont s a normal sixteen-year-old high school student. Smart but insecure, she spends most of her time online, where she can avoid her beautiful, aloof parents and their weird friends.

But when a shocking encounter reveals a horrifying family secret, Amber is forced to go on the run. Killer cars, vampires, undead serial killers and red-skinned, horned demons – Amber hurtles from one threat to the next, revealing a tapestry of terror woven into the very fabric of her life. As her parents close in behind her, Amber’s only chance rests with her fellow travellers, who are not all what they appear to be…

Witty, action-packed and heart-stoppingly thrilling, Demon Road will take you on an epic road-trip across the supernatural landscape of America.

Buckle up. It’s going to be one hell of a ride.

I have a few friends who worship the Skulduggery Pleasant series, but other than that, I went into my first Derek Landy novel with no expectations. I came out in love with Demon Road and the first SP book on my TBR.

Demon Road is such a glorious mismatch of genres that I can't see how anyone couldn’t find something to love in this new series. Amber’s adventures take us on a supernatural road-trip across America, featuring creatures straight out of horror movies and a healthy dose of growing up and Amber learning acceptance and friendship. When you through in the dark humour, it actually felt a little like Supernatural at points which was really cool.

I loved the dynamics between Amber, Milo and Glen on their trip across America. They’re three very different people with different aims and pasts and it was fascinating to see them cohabitate in a car for thousands of miles. I loved the wit and sarcasm and the grudging friendship that grew between them. Refreshingly, there also wasn’t a romance! It was so lovely to see relationships evolve in a supernatural YA series that didn’t involve gooey eyes, misdirections and love triangles and I so hope that carries through the series. Even though I would also like to see Amber find someone who loves both sides of her once she has fully accepted them herself.

Landy brilliantly sets up for book two, which I believe is called Desolation, with an epic ending. There are battles galore, a fight to the death, creepy creatures, some kicking ass from Amber and, most terrifyingly, her pursuers catch up with her and Milo. Even as it got later and later I just couldn’t put it down; I had to know how it ended. Would Amber achieve her mission? Run to safety? Make it out alive? So gripping.

Demon Road is an action-packed, creepy and brilliantly fun start to a new series. I want book two, please!

Thanks to Harper Collins for the review copy.