I Crawl Through It, AS King 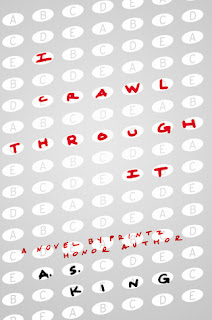 Other Titles by this Author: The Dust of 100 Dogs, Please Ignore Vera Dietz, Everybody Sees the Ants, Ask the Passengers, Monica Never Shuts Up, Reality Boy, Glory O’Brien’s History of the Future

Four teenagers are on the verge of exploding. The anxieties they face at every turn have nearly pushed them to the point of surrender: senseless high-stakes testing, the lingering damage of past trauma, the buried grief and guilt of tragic loss. They are desperate to cope, but no one is listening.

So they will lie. They will split in two. They will turn inside out. They will even build an invisible helicopter to fly themselves far away…but nothing releases the pressure. Because, as they discover, the only way to truly escape their world is to fly right into it.

I’m a big fan of what I've read of AS King’s before, but I knew that I Crawl Through It was likely to be very different from her previous novels, and while I didn’t dislike it, I didn’t like it either.

It’s a very surreal novel and I have to admit that from beginning to end, I knew very little about what was going on; what was real and what was all in their heads. Personally, that’s not really how I like to feel when reading so I was lucky I Crawl Through It is a quick read otherwise I would have struggled to finish it. Even though the novel switches between several POVs and their different interests, experiences, personalities etc were in the prose, the tone still felt very even and samey, with the exception of the poems that interspersed China’s narration. I felt a little like the surrealism of the style took away some of the emotional depth and truth to the characters at time; if I couldn’t understand their motives how would I connect with them, let alone feel something for them?

Lots of the elements of the novel are cleverly metaphorical: the red helicopter, dangerous bush man, Stanzi’s lab coat, the note Stanzi receives from her parents most evenings – but they’re also sometimes real things and at other times not. It's confusing and I imagine I missed lots of significant lines and moments because I was too busy going ‘huh?’, but I Crawl Through It is an AS King novel after all, so it’s beautifully written and definitely worth reading.

The novel explores the pressures of mental illness and trauma on those minds of teenagers with superior intelligence; how those pressures are worked out differently by everybody; the strain of school and standardised tests all while grappling with growing up and dealing with family issues. It explores the battles that are normally passed off as teen angst or disillusion with the world with honest brutality and that’s needed in YA so desperately.

I do think I managed to figure out the overall message in the end, however, and it can be summed up in a very famous quote that’s paraphrased from a Robert Frost poem: The only way out is through.

Thanks to NetGalley and Little, Brown Young Readers for the review copy.