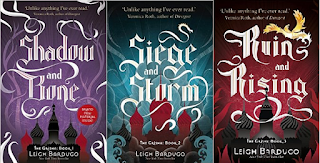 Please beware of spoilers for the first two books in the series as I review the second and last books.

What’s it all about?
The Shadow Fold, a swathe of impenetrable darkness, crawling with monsters that feast on human flesh, is slowly destroying the once-great nation of Ravka.

Alina, a pale, lonely orphan, discovers a unique power that thrusts her into the lavish world of the kingdom’s magical elite – the Grisha. Could she be the key to unravelling the dark fabric of the Shadow Fold and setting Ravka free?

The Darkling, a creature of seductive charm and terrifying power, leader of the Grisha. If Alina is to fulfil her destiny, she must discover how to unlock her gift and face up to her dangerous attraction to him.

But what of Mal, Alina’s childhood best friend? As Alina contemplates her dazzling new future, why can't she ever quite forget him?

Shadow and Bone
All I've heard about the Grisha trilogy since Shadow and Bone came out is how amazing it is and the dangerous appeal of The Darkling. I ended up loving it!

The world of the Grisha is fascinating, to me and to Alina. Alina is pulled from the army and settled into the Little Palace (that isn’t little at all) as part of Court after fearing for her and her best friend, Mal’s, life causes her to demonstrate an incredible power that she hadn’t known she existed. I really enjoyed watching Alina grapple with life as a Grisha. So often in fantasy the heroine discovers she has powers she’s suddenly the best in the kingdom, whether it be in fighting or wielding magic or generally kicking ass, but that’s not the case for Alina. She struggles with Grisha life and has to work her butt off to even begin to open up her potential.

While Alina is struggling with her Grisha training, she’s also dealing with being separated from Mal and not knowing where or how he is. I’m always a fan of friendship at the heart of the novel and I was so impressed by how effortlessly I became invested in their friendship, even when Mal was absent. I was so anxious to find out what was going on with them and hoping they would be reunited. And then The Darkling’s interference with all of the things throw everything into chaos and I couldn’t stop reading.

Siege and Storm
Siege and Stom picks up very soon after we see Alina and Mal off in the search of safety. But it doesn’t stay that way for long. I thought Shadow and Bone was full of danger and adventure but I knew nothing…

It’s not long before the Darkling comes after Alina again and woah, he got even more powerful. I loved that there wasn’t this whole two hundred page build up to them being tracked down and them posturing about how easy it’ll be to take him down – the threat is real and it's right in front of their face. I loved that and I really don’t recall seeing that used in YA fantasy very often at all but it’s very effective. The Darkling is genuinely unsettling, but he’s also such a curiosity and I can't help but be intrigued by him and what he’ll do to get what he wants.

One of my favourite bits about Siege and Storm was the introduction of a new character: Sturmhond. He’s brilliant. A mysterious crew of rebels rescue Alina and Mal from the embrace of the Darkling and reveal themselves to be a pirates and traitor Grisha, led by Sturmhond, who is a privateer, not a pirate, thank you very much. He’s charming, impossible to read and really throws a spanner in the works/ alina and Mal must decide whether to trust him and fight the troubles it brings into their relationship. I loved the humour and unreliability he brought to the novel and I hope we get to see him again in Ruin and Rising.

Ruin and Rising is going to be one heck of a conclusion and I’m very excited to see where Alina, Mal and the Darkling end up.

Ruin and Rising
It’s unusual that a final book in a trilogy fully cements my love of a trilogy, but Ruin and Rising did just that. Leigh Bardugo delivered on pulse-pounding action, horrible fear for the characters and completely unexpected plot twists that ended Mal and Alina’s story with a bang.

It rather belatedly occurred to me in the beginning of Ruin and Rising that considering Alina’s immense power, she always seems to be entrapped or manipulated by someone or something and the ridiculous amount that makes me as the reader fear for her and her friends. It turns out that, as always I this world, I had every right to be worried. The Darkling is at the most powerful he's ever been, and while Alina is too, it's still not going to be enough to beat him and save Ravka. She's going to need the third amplifier.

As Alina searches for the firebird, the stakes become higher and higher and some real curveballs are thrown at her and the gang. Thankfully, Nikolai has excellent timing and Baghra was around to provide some much-needed assistance, but honestly, I just loved how much it brought them all together. They're a rag-tag bunch, but they’ve become family over the course of the trilogy and they work well together. And that’s really quite good luck considering what's thrown at them.

I could not believe some of the twists and turns that popped up in Ruin and Rising. I was on the right sort of path for one of them, but everything blew me away. I really fell in love with everything about the Grisha world in this book. I was aching for Mal and Alina to fix things between them, but I also loved Nikolai – it was nice to be in such agony.

Ruin and Rising is the perfect ending to a brilliant trilogy. Emotional, Alina at her ass-kicking best, a plethora of mind-bending plot twists and an ending I was completely happy with. I couldn’t have asked for more!

The Grisha trilogy is beloved across the YA book world and I was really terrified I wouldn’t fall in love with it too. And I didn’t straight away; I definitely really liked it and I found the world fascinating and I immediately fell in love with Mal and Alina, but I didn’t love it until Ruin and Rising. In the final instalment, I gasped a good couple of times, was on the edge of my seat, feared for Mal and Alina and even let a few tears slide free at a particularly harrowing scene near the end. I’m so glad I’m finally in the Leigh Bardugo fan club!

A big thank you to Indigo for sending me the first two books in the trilogy.

Sophie
Posted by So Many Books, So Little Time at 07:00
Email ThisBlogThis!Share to TwitterShare to FacebookShare to Pinterest