An Ember in the Ashes, Sabaa Tahir 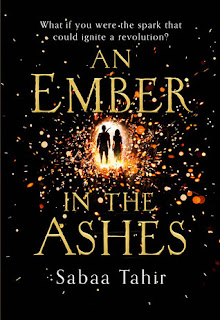 For years Laia has lived in fear. Fear of the Empire, fear of the Martials, fear of truly living at all. Born as a Scholar, she’s never had much of a choice. But when Laia’s brother is taken she must force herself to help the Resistance, the only people who have a chance of saving him. She must spy on the Commander ruthless and deadly overseer of Blackcliff Academy.

Elias is the Academy’s finest soldier – and secretly it’s most unwilling. He has seen too much at on his path to becoming a Mask, one of the Empire’s elite warriors and is desperate to escape the Academy. If he succeeds, he will be named a deserter. If found, the punishment will be death.

With the Masks’ help the Empire has conquered a continent and enslaved thousands, all in the name of power. Now they must find a new Emperor to rule over them. And before Elias can escape he’s ordered to participate in a ruthless contest to the death that will decide the next Martial emperor.

When Laia and Elias’s paths cross at the academy, they find that their destinies are more intertwined than either could have imagined and that their choices will change the future of the empire itself.

In the ashes of a broken world one person can make a difference. One voice in the dark can be heard. The price of freedom is always high. Sometimes it’s life itself.

Sabaa Tahir’s debut has been raved about since long before it even came out in June and I was a little put off by the hype. I'm clearly an idiot sometimes because An Ember in the Ashes is brilliant.

Just over 100 years ago, the brutal, military-led Empire conquered the Scholars and pushed them to the bottom of the pile, enslaving them, raping them and killing them for sport. Blackcliff trains boys to become soldiers of cruelty, ruthlessness and loyal to the Emperor. Laia is a Scholar whose parents were part of the Resistance and killed, and now her grandparents have been as well and her brother imprisoned. She's all alone.

The world is unusually brutal, more so than I’ve ever come across in YA fantasy before. Murder, rape, sexual assault, torture – everything horrible happens in An Ember in the Ashes, and usually at the hands of the Masks. The brainwashing that takes place at the academy is scary and although it’s based on an Ancient Roman Empire, it’s not hard to imagine that kind of state spreading across our world, especially when coupled with the technology we have. It made Elias’s beliefs about Blackcliff, the Empire and how people should be treated so unusual and dangerous for him to possess, and I loved him for it and the mental chaos it caused him.

Laia is a fierce protagonist, but she grows into fierceness. She makes mistakes, has regrets and worries incessantly about doing the wrong thing, but she learns and grows against the atrocities she experienced inside Blackcliff. As Laia discovered more and more, I became suspicious about the Resistance and their true motives and just wanted Laia to get out as quick as she could. But she made it to the end, stronger and more determined than ever and I was genuinely proud of her. And the same goes for Elias.

I usually find that in a dual narrative fantasy novel the two protagonists meet almost immediately and their stories become so intertwined that the dual narrative seems only serve as a glimpse into the minds of the characters, but Laia and Elias’s stories felt like separate stories, even living in the same place. I loved it. They don’t meet until at least 150 pages in and their paths don’t really interlink properly for a long while and I loved speculating on how they would meet again and what would happen between them.