The Sun in Her Eyes, Paige Toon 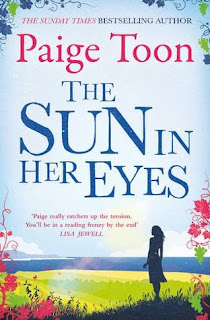 Other Titles by this Author: Lucy in the Sky, Johnny be Good, Chasing Daisy, Pictures of Lily, Baby Be Mine, One Perfect Summer, The Longest Holiday, The Accidental Life of Jessie Jefferson, Thirteen Weddings

Blinding sunshine… A bend in the road… What became of the little girl with the sun in her eyes?

Amber was three when a car crash stole her mother’s life. She doesn’t remember the accident, but a stranger at the scene has been unable to forget. Now, almost thiry years later, she’s trying to track Amber down.

Amber, meanwhile, is married to Ned and living on the other side of the world in London. When her father has a stroke, she flies straight home to Australia to be with him. Away from her husband, Amber finds comfort in her oldest friends, but her feelings for Ethan, the gorgeous, green-eyed man she once fell for, have never been platonic.

As Ethan and Amber grow closer, married life in London feels very far away. Then Amber receives a letter that changes everything.

‘Before your mother died, she asked me to tell you something…’

I’m a huge fan of Paige Toon’s novels. They always feature an emotional rollercoaster, hot guys, and international locations and give me a compulsion to keep reading until I reach the end – The Sun in Her Eyes definitely hit the spot!

It’s been a tough year for Amber and Ned and their marriage is taking a hit. Then Amber is made redundant and she gets a call to say that her dad has had a stroke, but he’s in Australia and she lives in London. Twenty-four hours later and Amber finds herself back in Adelaide where she grew up and she’s suddenly reunited with her oldest friends and the boy she has been in love with since she was a little girl. And it’s not Ned. I’m a huge sucker for childhood sweethearts and long lost loves and The Sun in Her Eyes puts a different spin on this.  Amber and Ethan were never actually together, but were best friends, and she watched him date through their high school while she looked on in agony. It’s not often that we get to revisit unrequited love which is odd as it happens to everyone!

With the stress of her dad’s condition and living with her dad’s wife who she never got along with as a teenager takes its toll and she takes solace in gorgeous, about-to-be-divorced Ethan. Paige Toon is really good at playing with your emotions and getting you to think and feel in the way of her characters regardless of your opinions and beliefs. I became so swept up in their secret trysts, just like Amber does, that it took a long time for me to doubt what was happening between them. It was really interesting to feel the doubt creeping in and SPOILER ALERT seeing the love interest turn a little shady. Very unusual for Paige Toon’s novels!

I really enjoyed the messages in The Sun in Her Eyes. The idea of fantasies becoming reality and being disappointed is really interesting and that definitely happens with Amber and Ethan. She loved him for such a long time that she was almost blinded by it, and I was too, and I have been in real life – I think it’s almost a turning point in growing up, really. As Amber learns, the flashy, intense and passionate affairs aren’t necessarily the strongest relationships. That type of love isn’t always what you need, even if you think it is. Very thought-provoking and it made me look back on my biggest unrequited love in a different way. Turns out, I feel very similarly to Amber.

As always, Paige Toon delivers a bucket-load of emotion, complex characters and I’m ready for the next one, please!