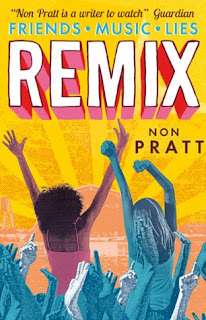 Other Titles by this Author: Trouble

From the author of Trouble comes a novel about boys, bands and best mates.

Kaz is still reeling from being dumped by the love of her life… Ruby is bored of hearing about it. Time to change the record.

Non’s debut, Trouble, was one of my favourite books of last year so I’ve been counting down the days until Remix. It totally lived up to expectations.

Kaz and Ruby are both recently single. They’ve had a tough summer so after their getting their GCSE results they head to the music festival Remix with Ruby’s brother, Lee, and his boyfriend Owen. Three days to put the boys behind them, see Goldentone on stage and have come quality Ruby-and-Kaz time. Obviously, it doesn’t quite go to plan.

As with Trouble, the horror and awe and excitement and pain of being a teenager is perfectly captured in Remix. Non just gets it. The emotions are real, visceral and honest, the friendships are genuine and the relationships authentic. Sometimes when friendships are a focal point in YA there seems to be an aura of perfection around them. They never fight or even bicker, they don’t even disagree. There’s also often an underlying element of the frenemy, but not in Remix. Kaz and Ruby are the kind of besties that define the term. They understand each other, love each other and want what’s best for the other. And that wanting what’s best for each other causes them to fight – they’re fighting for each other as well as against each other and that to me is being a best friend. They’re still people and you can’t always stop being jealous of your bestie, or someone becoming friends with them; that fear of losing them to someone better is crippling and it’s not something that really comes up that much.

But one of the best things about Kaz and Ruby’s friendship? It doesn’t magically prevent them from making mistakes and getting hurt, there’s just someone waiting in the wings to pick up the pieces and try to put them all back together. The genuine relationships don’t stop at the friendships, however. Kaz’s ex, Tom, and Ruby’s ex, Stu, are not perfect by any stretch of the imagination and that made them great characters. Just like the girls, they mess up, they don’t know what they’re doing, and they are just as real.

Okay, I’m getting seriously rambly and all over the place so I’m going to leave you with this: Remix explores all parts of being a teenager – sex, sexuality, friendship, relationships, exam results, underage drinking, poor decisions, fantasies becoming reality – and Non does it with aplomb. Her voice, her characters and her stories are ones needed by teens to know that actually, they’re doing okay – even Kaz and Ruby fight, bad results aren’t the end of the world, maybe what you thought you wanted isn’t after all – they’re doing fine.

Thanks to Cait for this!

Side note: I do consider Non a friend of mine, but that hasn’t influenced by review at all – she’s just a bloody good writer!