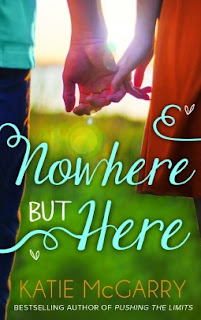 Other Titles by this Author: Pushing the Limits, Dare You Too, Crash Into You, Take Me On, Breaking the Rules

Seventeen-year-old Emily has always known her biological father is a dangerous man but since she lives far away with her mother and adoptive dad, he’s never given it much thought. But when news of a death brings Emily’s family to Kentucky for a quick visit, Emily finds herself in the middle of a feud – and drawn to a guy she should have nothing in common with.

Recently out of high school, Oz is consumed with the fact that a recent screw-up might cost him everything. He has one shot at redemption: keeping Emily safe while making sure she doesn’t learn the truth about her father’s past.

Even as forbidden feelings spark to life, Oz and Emily will face an adversary that threatens not only their relationship, but their lives…

I have loved all of Katie McGarry’s books so I was really interested to see her launch a new series with her trademark emotion, character development and steamy kisses.

I did have a slight rocky start with Nowhere But Here ­– I struggled with the idea of the motorcycle club a little. I really don’t like them and thankfully they’re not all that common in the UK so I only had the unpleasant stereotypes in mind. As Emily’s story developed and she became further embroiled in the Reign of Terror, I started to be able to focus on the positives, though I was still bothered by the sexism and the macho-ness and the violence. I liked that they valued loyalty, brotherhood and family and that everyone in the club had each other’s backs.

Oz, the hero of our story, is freshly graduated and desperate to join to ranks. As a test he is set to guard Emily while her dad goes off to help the business run by Reign of Terror members. Naturally, it gets a little heated between them and Oz has to fight between his growing feelings for Emily and the knowledge that Eli will never let him join if he’s messing around with his daughter. It added in some really excellent tension – there were some serious sparks between them. As always, Katie McGarry really delivered on the sparkly romance that has a heavy dose of emotion and I was sucked into the romance once again.

Though I actually think that my favourite relationship in the novel was that between Emily and her dad. Emily only sees Eli when he swings into town once a year. As far as she’s concerned, he abandoned her and her mum so why should she make an effort? Turns out that she wasn’t completely right in her knowledge. It was verging on physically painful to see Eli’s heart break at every rebuttal and declaration of the truth that she knew. He tried so hard and so endlessly to build a relationship with her and it was really lovely to see the moments when they had a breakthrough.

Nowhere But Here is about family, doing everything to protect the ones you love and discovering the truth about what you want and who you are. Already looking forward to Walk the Edge.

Thanks to NetGalley and Mira Ink for the review copy.