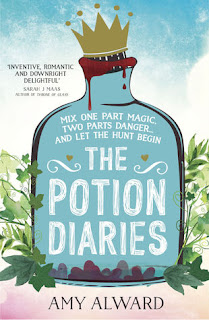 When Nova’s princess (more Kate Middleton than Rapunzel!) is poisoned by her own love potion, the city’s alchemists are entered into a Wilde Hunt – a deadly quest to find a cure. It’s the chance of a lifetime for Sam’s alchemist family, who have been mixing magic potions for generations…but can Sam save their crumbling reputation?

Sam must choose whether to work with or against her best friends, Anita or Arjun, and finds herself thrown towards Zain, heir to the ZoroAster synthetic potions corporation, and her arch enemy. He also happens to be the bot most likely to marry the princess…

It took me a little while to get into The Potion Diaries and connect with the characters properly, but I did end up really enjoying it.

I found the setting of a fantasy world intermingled with the modern twenty-first century with added tech and gadgets a little strange for quite a while. It’s such a strange combination and not one I’ve come across before and I just couldn’t get used to it; it took me at least half of the book to become comfortable with it, to be honest. I did eventually come to really enjoy the mythology of Sam’s world. I loved that not everyone had magic, but those that did had different affinity levels for it and used an object that was particular to them to channel it and control the raw power. Those with magic are called Talented and those without are just ordinary. Sam is ordinary.

With a dual narration between Sam, an alchemist from a famous mixing family, and Evelyn, Nova’s princess, we get to see both sides of the coin. Sam had a lot more chapters than Evelyn and I was glad as I really liked her; she was what made me carry on with the novel when I was struggling with the world set up. I love her need for learning and books and research as well as the interesting family history of the Kemis. Their reputation as world-class alchemists and mixers is failing in a world overtaken by synthetic ingredients and huge, industrial laboratories. I loved having the idea of old skills and legendary businesses failing in a modern world as it’s been happening for years now, and particularly to those taking over family businesses now, and it’s rarely talked about so openly in literature.

With the Wilde Hunt, Sam has the opportunity to raise some money to restore their shop and the good name of the Kemis. I really loved the quest for the unknown ingredients of the banned and dangerous love potion. The story took a turn for the adventurous and high octane, leaving a blazing trail of betrayals, miscommunications and near-death experiences. But most of all, I loved that Sam openly admitted that even though she was doing this, it wasn’t her forte, it wasn’t her comfort zone. She preferred her library and burying her head in research and potions. She even thought in terms of potions while was really cool. It was so nice to see a heroine praised for her intelligence and strength outside of the physical which you rarely see in any kind of fantasy. She doesn’t have secret ninja skills or a revelatory past, she is just skilled in her area and manages to apply that to other things to scrape by.

Amy Alward’s debut is a sweet, fun read full of adventure that’s perfect for younger teens and those taking their first forays into fantasy.