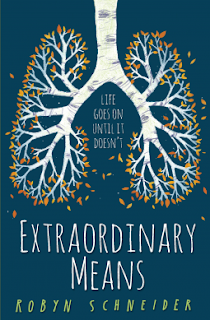 Other Titles by this Author: Severed Heads, Broken Hearts

When he’s sent to Latham House, a boarding school for sick teens, Lane thinks his life may well be over.

But when he meets Sadie and her friends – a group of eccentric troublemakers – he realises that maybe getting sick is just the beginning. That illness doesn’t have to define you, and that falling in love is its own cure.

Extraordinary Means is a darkly funny story about true friendships, ill-fated love and the rare miracle of second chances.

Though Extraordinary Means has some really strong points, I had to admit that I felt very little about it either way.

Latham House is a place for teenagers who have contracted a strain of drug-resistant TB. I have to admit that I was expecting the illness mentioned in the synopsis was going to be mental or emotional so I was completely taken aback. It was a really unusual plotline and I was definitely interested as I associate TB with something that was mostly wiped out, or at least been incurable, for a really long time in the UK. It has a reputation for killing off celebrated literary figures like Jane Austen, John Keats, the Bronte’s, Elizabeth Barrett Browning and I could go on!

But I have to admit that this is where my fascination ended. The goings on at Latham House were very similar to that of boarding school, but with medical sensors, super-relaxed schedules and weekly doctor check-ups. It created a microcosm that made the enforced setting of high school a little more obvious, but it didn’t really do much else for me. It had so much potential…

I also didn’t really connect with either Lane or Sadie and I didn’t care enough to get behind their romance. They both fell a little flat and though they had interesting moments, they were fleeting and were often overshadowed by supporting characters or a heavy-handed philosophical reflection.

Extraordinary Means fell rather short for me and I fell like the John Green and Rainbow Rowell comparisons are way off, but I have no doubt that loads of people will fall in love with Lane and Sadie’s story.