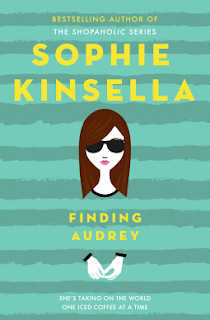 Other Titles by this Author: Confessions of a Shopaholic series, Can You Keep a Secret?, The Undomestic Goddess, Remember Me?, Twenties Girl, I’ve Got Your Number, Wedding Night

A laugh-out-loud romance from the bestselling author of the Shopaholic series.

Meet Audrey: an ordinary teenage girl with not so ordinary problems.

Aside from her completely crazy and chaotic family, she suffers from an anxiety disorder than makes talking to her brother’s hot new best friend a bit of a challenge.

But Audrey has a plan to face her fears and take on the world again. But first stop: Starbucks.

I’ve read a few of Sophie Kinsella’s adult novels so I was really intrigued to see her turn her pen to YA, especially when I found out that Finding Audrey dealt with anxiety.

Kinsella’s easy, familiar prose translates to a younger audience perfectly. Audrey tells her story in a really cool direct address that made me feel like I was a part of her world immediately. And what a world! Audrey’s family is chaotic and messy: she has two brothers, adorable Felix and computer game-obsessed Frank; her Daily Mail obsessed mum and her dad who’d just like some peace.

After an incident at Audrey’s school and the following doctor and therapist appointments, Audrey’s mum is kind of rather fixated on Frank and his love of a particular computer game. I have to admit that she got on my nerves more and more as the novel went on until I ended up actually disliking her. She was constantly on Frank’s back and getting everyone back up her ridiculous claims. I mean, I knew it was her gaining control in an area she could control, unlike with Audrey’s illness, but bloody hell, it was annoying.

But aside from everything else that features in this novel, Finding Audrey tackles anxiety wonderfully. I was so impressed with the sensitivity and consistency in Audrey’s struggles, her improvements, her setbacks and her treatment. She suffers with Social Anxiety Disorder, General Anxiety Disorder and Depressive Episodes. It’s so important for mental illness in teenagers to be represented with honesty and respect like this, especially when it was mentioned that Audrey’s problems were disregarded as attention seeking at school and the lack of support that she faced before she was officially diagnosed.

Finding Audrey is an enjoyable read while still tackling incredibly important issues that need a lot more attention in YA.