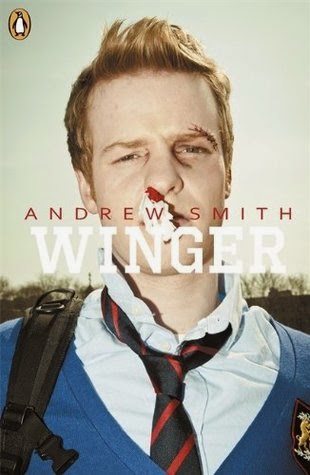 Other Titles by this Author: The Marbury Lens, Passenger, Grasshopper Jungle

e’s a student at Pine Mountain, a boarding school for rich kids. He’s sharing a room with the biggest bully on the rugby team. And he’s totally in love with his best friend Annie, who thinks of him as a little kid.

With the help of his mates and his talent for doodling comics, Ryan Dean is trying his best to get a handle on school life and rugby. But when the unthinkable happens he has to find a way to hold on to the important things – no matter what.

Hilarious and heartbreaking, Winger is a coming-of-age story for the twenty-first century.

I’d heard endless amazing things about Winger from the American bloggers and vloggers that I jumped at the chance to review it. I wasn’t too sure at first, but I ended up really loving it.

Once again, Andrew Smith has managed to deliver a novel with subjects and characters that feel instantly familiar, but it’s put across in a way so unique and refreshing. Winger is peppered with comics and graphs and diagrams doodled by Ryan Dean and moments of script-like prose of conversations between the facets of Ryan Dean inside his own head which set it apart nicely. One of my favourite ways to be told a story is having the character talk directly to me, having them aware that they are telling me a story retrospectively and adding in quips and hints and foreshadowing of what’s to come and this happens in Winger. It’s a style I absolutely adore so it was sure to be a winner!

I have to admit that I fully expected to fall head over heels with this book instantly. I loved the weird and wacky Grasshopper Jungle and I’d heard brilliant things about Winger, but it actually took a while to grow on me. It grew steadily and steadily until I suddenly realised I had read two hundred pages and didn’t want to put it down!

Andrew Smith has thrown together a raggle taggle bunch in this novel. I can’t quite decide if I genuinely like all of them, but I love and care for them, and even respect (most) of them in a way. We have Ryan Dead, a fourteen-year-old in eleventh grade who can’t stop thinking about sex; Seanie and his worrying sense of humour; Annie who refuses to love Ryan Dean back; Chas, the terrifying bully, who’s awareness of his lack of friends breaks my heart and Mrs Singer, the teacher in charge of the girls in O-Hall who Ryan Dean is convinced is cursing him. Speaking of Annie, I was a little concerned that she could easily become a Manic Pixie Dream Girl, but she managed to avoid that purely with how little I found out about her for the most part of the novel, and then when we finally got to know her a little bit, I was relieved to find her a well-rounded and realistic character.

Rugby is a huge part of Winger. Ryan Dean and his friends are all on the team and the training and games form a large part of the action, as well as providing lots of opportunities for the boys to lock horns and get their anger at each other of their chests. I was surprised at how bloody and violent some of the fights were between the boys on the rugby field – it quite often made me wince! Even though I’m not particularly fussed by sports, I genuinely enjoyed the mentions of the games and the training. Strange.

Winger ends with a bang straight to the head and the heart. It leaves an imprint, one I’m sure will still be stamped on me for a while to come. Seriously, go and read it.

Thanks to Puffin for the review copy.