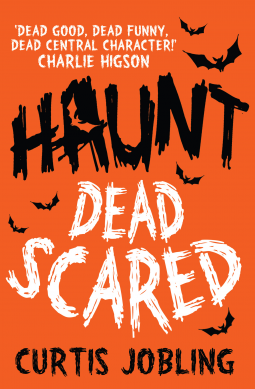 Other Titles by this Author: Wereworld: Rise of the Wolf, Rage of Lions, Shadow of the Hawk, Nest of Serpents, Storm of Sharks, War of the Werelords

When Will finds himself in hospital, but unable to make anyone see or hear him, he realises that he never made it home from his first kiss with the school hottie. Knocked off his bike in a road traffic accident, Will is now officially dead – and a ghost. But somehow, his best mate, Dougie, can still see him, and, what is more, increasingly Will seems bound to Dougie, going only where Dougie goes.

Once they’ve exhausted all the comic possibilities of being invisible, they set about unravelling the mystery of Will’s predicament. Is it something to do with that kiss, or the driver that killed him and didn’t stop? Maybe they will find an answer by investigating the rumour that there is an unhappy spirit haunting the ruins in the school grounds, and if so, why? What they discover is a long-buried mystery, which stretches its fingers right into the present...

Ghosts aren’t really my go-to supernatural creature, but Curtis Jobling changed my mind. I was laughing aloud only a few pages in.

The banter between Dougie and Will is brilliant. They meanly tease each other in only the way best mates can, and these two really are the best of mates. I mean, there aren’t many people who’d let you haunt them are there? The genuine affection between the boys was so easy and natural that it was closer to brotherhood really – I really enjoyed reading their interactions, especially as they were full of pop culture references which were generally used to insult each other.

The stress of Will’s death and how it seemed that Dougie was going a little mad (proclaiming you’re dead best friend is a ghost can have that effect) did through a few fractures into their relationship, however. Dougie was unable to grieve and move on and was constantly being dragged into Will’s ghostly investigations into whether there were any other ghosts around. And of course, the person behind his hit and run. They worked around it though and ended up solving a few of their mysteries, catching a murdered and putting an old ghost to rest. Not bad for a term’s work, really.

Haunt is fresh, funny and incredibly easy to read. I can’t wait to see what Will and Dougie get up to next.

Sophie
Posted by So Many Books, So Little Time at 16:18
Email ThisBlogThis!Share to TwitterShare to FacebookShare to Pinterest