The One, Kiera Cass 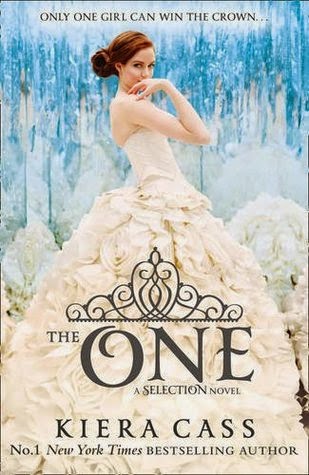 Other Titles by this Author: The Selection, The Elite

When she was chosen to compete in the Selection, America never dreamed she would find herself anywhere close to the crown – or to Prince Maxon’s heart. But as the end of the competition approaches, and the threats outside the palace walls grow more vicious, America realises just how much she stands to lose – and how hard she’ll have to fight for the future she wants.

I have a strange relationship with the Selection trilogy: I thoroughly enjoy it, but I also think it could be so much better. The same went for The One.

America has grown and developed very little over the course of the three books. As her story comes to a close she is still stubborn, hot-headed, passionate about eradicating the caste system her world works in, and endlessly frustrating. Her to-and-fro-ing gives me a headache and generally made me want to throw The One across the room. In some instances, she cannot make a decision to save her life, and yet when it comes to something that throws a spanner in the works, she is dead set.

Aspen’s presence in the palace fell into that frustration a little in this book. Until the end section of The One, I didn’t really see a need for him to be there permanently, other than a wandering threat to Maxon and America’s relationship – I felt there was enough will-they-won’t-they purely in the idea of The Selection, without some doubt on America’s side too. All of this made for very little in the way of plot progression, and yet it didn’t hamper my enjoyment of the story very much at all. I still devoured The One in two big gulps, and enjoyed it.

But I still think there could be so much more to this series. Cass has created a really interesting world, a world where people are splits into caste which dictate their lifestyle, career, social standing and chances of survival; there is rebellion in the air, from two separate groups; there’s a harsh and dictatorial king, but it’s all about The Selection and the romance and the choice between the girls and America’s choice between Aspen and Maxon. There were hints at what could have been some excellent development of Illea’s history and current position, but it stayed at just that, hints. I just wanted more.

I am glad that the relationship between the four remaining girls - America, Celeste, Kriss and Elise – changed and grew into something more than competition. With the encouragement of the lovely Queen Amberly, the girls began to see that only those four would ever know what it was like to be in The Selection and that that would tie them together for ever. They are all so different, but together they make a wonderful team and group of friends. I was so glad to see a bit of feminism into what can be seen as a slightly anti-girl trilogy at times.

In the end, I was really pleased with how the trilogy ended and I’m looking forward to seeing what Kiera Cass throws at me next.

Thanks to NetGalley and HarperCollins for the review copy!