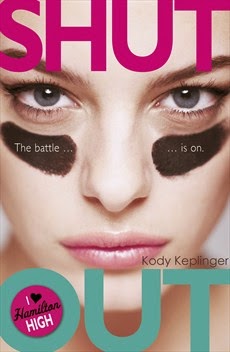 Other Titles by this Author: The DUFF, A Midsummer’s Nightmare, The Swift Boys and Me

Lissa rallies the girls and calls a sex strike. The boys won’t get any action from them until the teams make peace. What they don’t count on is a new rivalry: a girls-against-boys showdown that hinges on who will cave first. And Lissa finds that it’s much harder than she ever thought it would be...

I’ve recently become a huge fan of Kody Keplinger’s books and reading Shut Out only furthered that. It’s brilliant!

The battle of the sexes is as old as time, and so is the tactic of a sex strike, but Keplinger brings it up to date and firmly into the hands of modern teenage girls with ease and aplomb. The girls dating boys from the football and soccer teams are fed up with coming second to a rivalry the boys don’t even remember the origins of and decide to do something about it. Their leader, Lissa, was by far my favourite character. I love that she has anxieties, an OCD tendency to count everything and an inclination to babble.

But one of the best things about Lissa’s character? The loss of her mum didn’t define her character, dominate the story or lie at the root of her problems; the accident was a horrible even in her life that has changed her, but doesn’t rule her. A dead parent is usually used as a crutch in YA to pin issues on so it was incredibly refreshing to see that not being the case. It even alleviated the annoyance that, yet again, some poor character has lost a parent. It comes up so often nowadays.

The strike caused an eventual outpouring of honesty from all of the girls involved that was desperately needed by all of them, even if they didn’t know it. Even now, sex still has a taboo attached to it. It was discovered by all that there were major double standards occurring between the boys and the girls, they shouldn’t believe everything they hear about each other and that there’s no such thing as normal. The way Keplinger looks at female sexuality, especially for teens, is illuminating and important. I want to push her books into the hands of every teenage, and young adult, girl I come across.

Lissa’s relationship with Randy felt wrong from the start, and put it this way, his name pretty much sums up his personality. He’s just not right for her. And he’s a bit of a dick. Then came Cash who has a little history with Lissa and the sparks started flying. I loved the connection they had and how different it was to the one with Randy.  Cash starts to reinforce lots of the lessons that Lissa and the girls are learning about themselves and what it’s okay to think and feel.

I adored Shut Out and I’m anxiously awaiting news of her next release. Please let it be soon!

Thanks to Hodder for the review copy!