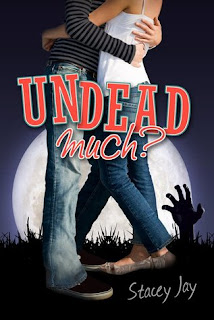 Undead Much? - Stacey Jay
Pages: 306
Publisher: Razorbill
Release Date: 21st January 2010
Other Titles in this Series: You Are So Undead to Me (my review)
Q: How many guys does it take to make your boyfriend wild with jealousy?
A: Only one, if he’s undead.
Megan Berry had a perfectly average new-sundress-and-boy-obsessed life - until her power to settle the Undead returned. Oh, and her best friend tried to kill her - and ruin homecoming - with a bunch of black magically raised zombies. At least she got a spot on the pom squad and a smokin’ boyfriend (Ethan). But now Megan is in deep fertilizer all over again. Why? Well, let’s see…
- Feral new super-strong zombies? Check.
- Cheerleader vs. pom squad turf war threatening the end of the half time as we know it? Check.
- An Undead psychic hottie (Cliff) who’s predicting a zombie apocalypse - and doing his best to tempt Megan away from Ethan? Check.
- Earth-shattering secrets that could land Megan in Settler prison for life. Um…It wasn’t me!!
Everyone thinks Megan’s at fault for the new uber-zombie uprising. Looks like she’ll need the help of both Cliff and Ethan if she’s going to prove her innocence before it’s too late.
Undead Much? is the action-packed, zombified sequel to Stacey Jay’s debut novel, You Are So Undead to Me.
I really liked Megan in You Are So Undead to Me; I thought that she was nice, funny and normal (for a Zombie Settler, anyway.) But I just kept changing my mind about her in Undead Much?. In the beginning, Megan seemed overly confident, almost bordering on arrogant, and it really irritated me. But as soon as the accusations started being hurled at her, I was firmly back on her side. Then she did something very stupid and my sympathy fled. However, as soon as her life was turned upside-down again, I wanted everything to turn out okay for her. Confused? I was!
Reading Undead Much? really made me realise how complicated American high schools are. I mean, who knew there was a difference between cheerleaders and the pom squad? I do now! (Pom squad = dancing, cheerleaders = dancing-ish, cheers and pompoms). Although I would have liked to go to a US high school for a bit, I feel that I’m much safer in my UK sixth-form college. We don’t have cheerleaders OR a pom squad!
Although I didn’t enjoy this as much as I did You Are So Undead to Me and I felt that it didn’t really get going until about two-thirds in, the set-up for book three at the end of Undead Much? made me sufficiently intrigued to continue reading the series.
For my 2010 100+ Reading Challenge
Sophie
Posted by So Many Books, So Little Time at 09:00
Email ThisBlogThis!Share to TwitterShare to FacebookShare to Pinterest