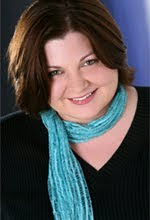 Tera Lynn Childs won the RITA award for best First Book for Oh.My.Gods. and has written more about Phoebe in Goddess Boot Camp. Tera’s third novel, Forgive My Fins, will be released in the US in June.
1. Is there a specific time or place that you do your best writing in?
Usually I write in the mornings, starting at around ten o'clock or so. That way, I can get my page count for the day done and then waste the rest on email, internet, and social networking. I absolutely cannot write at home, so I usually take myself to the nearest Starbucks or other coffee shop. Give me a comfy chair, a tasty beverage, and a stream of people to watch and I'm a happy writer.
2. Who were your favourite authors as a teenager? Are they different to your 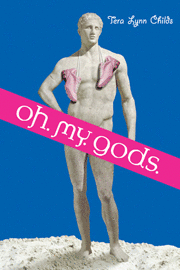 current favourites?
When I was a teen we didn't have the wide selection of young adult books that we do now. Also, I wasn't the biggest reader in high school. Other than books required for school (most of which still make me gag) I read a lot of Michael Crichton. Right now, my favourite authors are those who inspire me most as a writer, especially those who are masters at the emotional journey, like Suzanne Collins, E. Lockhart, and Susan Beth Pfeffer. And my unequivocal writing hero is Jaclyn Moriarty.
3. If you were only allowed to take three books to a desert island, what would they be?
These would change from time to time, but right now it would be THE HUNGER GAMES by Suzanne Collins, FLY ON THE WALL by E. Lockhart, and THE YEAR OF SECRET ASSIGNMENTS by Jaclyn Moriarty. (Note the parallels with the previous question.)
4. Is there a novel that you wish you’d written? Why?
THE HUNGER GAMES. Definitely. The farther I go in my career, and the more I learn about writing and analyzing the writing of others, the pickier I've become about reading. Even in books I love there is almost always something I would tweak or change if I were the author or editor. Not with THE HUNGER GAMES. I wouldn't change a single syllable. 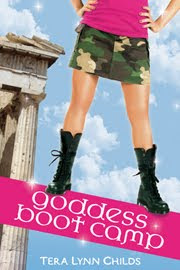 5. Where did your interest in Greek mythology stem from and why did you decide to write about it?
Ever since I can remember I've been fascinated by ancient cultures: Greece, Rome, Egypt, Inca, Maya. I loved the mystery of a vanished civilization, it was a puzzle I wanted to piece back together, to understand how they flourished and why they disappeared. I never specifically said, "I want to write about Greek myth." Instead, I came up with a fun working title (Growing Up Godly) and had to find a story to fit. Since I don't write religious fiction, then the Godly bit had to mean something else. The Greek gods! From there, everything just fell into place.
6. You’ve written about descendents of Greek gods and mermaids. Are there any other mythical creatures that you plan to try your hand at writing about?
That's a tough one, because so many of the mythical creatures just aren't that romantic. A guy with the torso of a man and the legs of a horse? Not exactly a dream. I have a very thick encyclopaedia of mythical creatures that I like to flip through every so often, looking for inspiration. There are a couple that have caught my eye, but no real story ideas have hit me yet.
7. Will you ever write any more books about Phoebe or her world? 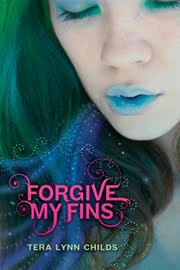 Oh, I hope so. I have a couple (okay, tons) of ideas, but it's just a matter of things lining up right with the stories and the timing and the sales numbers on the first two books. We'll have to wait a bit and see.
8. Are you working on anything at the moment? Can you tell us anything about it?
Right now I am waiting on the revisions for the sequel to FORGIVE MY FINS (which will most likely be titled FINS ARE FOREVER) that is due out in Summer 2011. And I am writing the first book in my new, untitled trilogy which will debut in Fall 2011. It's about triplet descendants of the gorgon Medusa who learn they are destined to guard the door between the world of monsters and that of man.
Thank you very much, Tera! You can visit Tera at her website or her blog and read reviews of for Oh.My.Gods. and Goddess Boot Camp here and here.