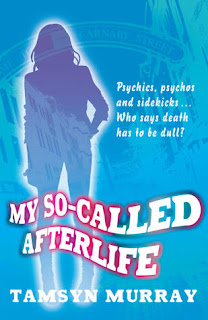 Pages: 184
Publisher: Piccadilly Press Ltd.
Release Date: 1st February 2010
‘Aaargh!’ Stumbling backwards, the man’s face flooded with horrified embarrassment. ‘How long have you been standing there?’My mind fizzled furiously. He could see me. He could actually see me! I could have hugged him! Well, I couldn’t, but you know what I mean.
Fifteen-year-old Lucy has been stuck in the men’s loos since she was murdered there six moths ago and Jeremy is the first person who’s been able to see her. Just her luck that he’s a seriously uncool geography type - but at least he’s determined to help.

Once he’s found a way for her to leave the loos, she’s soon meeting other ghosts, including the gorgeous Ryan. However, when Jeremy insists that she helps him track down her killer, she has to confront her greatest fear…
Tamsyn Murray’s My So-Called Afterlife is a sharp, funny and moving debut that kept me smiling throughout.
Our heroine, Lucy Shaw, is one hell of a girl. Even after being brutally murdered and being entrapped in the men’s public toilets on Carnaby Street for six moths, she still retained her spirit. Lucy is sparky, sarcastic and brilliantly funny in her observations and one-liners. Though I’d love to be her friend, I don’t think I’d want to be haunted by her. She talks too much!
Underneath the light and quirky exterior, My So-called Afterlife deals with many deeper and heavier issues. Obviously death is the predominant one, there are also many of it’s branches such as murder, suicide, loss, grief and even bullying. In fact, even exorcism makes a dramatic appearance. Regardless of the sad and gloomy elements, My So-Called Afterlife isn’t even a tiny bit depressing. It’s hopeful. Hopeful that murderers will be caught, that the ghosts and their families will find peace and even that you can still fall in love even if you’re dead.
I loved My So-Called Afterlife so I can’t wait to read Tamsyn Murray’s next offering, My So-Called Haunting, when it’s released later in the year.
For my 2010 Debut Author Challenge, 2010 100+ Reading Challenge
Sophie
Posted by So Many Books, So Little Time at 09:00
Email ThisBlogThis!Share to TwitterShare to FacebookShare to Pinterest