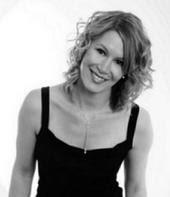 Tamsyn Murray lives in London with her husband, daughter and an assortment of pets. My So-Called Afterlife is her first novel.
1. Is there a specific time or place that you do your best writing in?
I write wherever and whenever I can but I probably find it easiest to work when there are no distractions - like fabulous blogs, for instance :)
2. Who were your favourite authors as a teenager? Are they different to your current favourites?
I read anything I could get my hands on when I was younger, from the Sweet Valley High books (about a set of sixteen year old twins living in California) to Jane Austen but my favourite authors were Terry Pratchett, Robin McKinley and Neil Gaiman. They're still my favourites, although others have joined them - I dropped everything for Harry Potter.
3. If you were only allowed to take three books to a desert island, what would they be?
Only three?! One of them would definitely have to be Beauty by Robin McKinley (a retelling of the Beauty and the Beast story) and I'd have to have Good Omens by Neil Gaiman and Terry Pratchett. The third one is a tough call - maybe Angus, Thongs and Full Frontal Snogging by Louise Rennison because it never fails to make me giggle.
4. Is there a novel that you wish you’d written? Why? 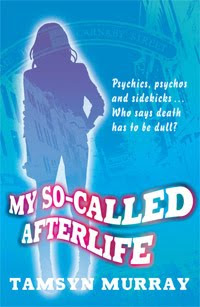 There are lots! In fact, I wish I'd written almost every book I read because I am in awe of the way each writer crafts their story. I often find myself wondering how I'd tell the tale but then it would be a different book.
5. If you were a ghost, who would you want to haunt and why?
Now this is a juicy question! I'm a big Muse fan so I'd probably haunt the lead singer, Matt Bellamy - to learn the secrets of his musical creativity and not to catch a glimpse of him on the shower, obviously!
6. On the flip side, who would you like to be haunted by and why?
Another great question. I think it would be great to have someone around no-one else could see - imagine how much fun a boring lesson or meeting would be? So I think I'd actually like to be haunted by Lucy and her wicked sense of humour.

7. What do you think are the perks of being a ghost?
I reckon there are loads: no work or school, never missing out on tickets for that must-see gig, not worrying about bad hair days but the biggest perk would have to be walking through walls. How cool would that be?
8. Are you working on anything at the moment? Can you tell us anything about it?
I'm currently working on My So-Called Haunting (out in September), which is the follow-up to My So-Called Afterlife and has a few of the same characters. The main character is Skye, a fourteen year old psychic, and the story follows her as she settles into a new school and tries to help the ghost of a boy who was killed in a gang shoot-out. Although Lucy isn't in this book I'm hoping she might join forces with Skye at some point in the future - now that would be a lot of fun to write!
Thank you very much, Tamsyn! You can visit Tamsyn at her website here and read my review of My So-Called Afterlife here.
Sophie
Posted by So Many Books, So Little Time at 09:00
Email ThisBlogThis!Share to TwitterShare to FacebookShare to Pinterest