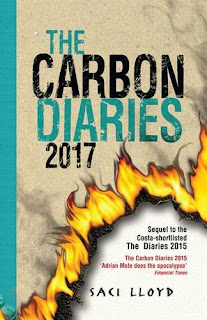 The Carbon Diaries 2017 - Saci Lloyd
Pages: 400
Publisher: Hodder Children’s Books
Release Date: 7th January 2010
Other Titles in the Series: The Carbon Diaries 2015
It’s so weird being inside history. I keep waiting for someone to press the stop button.
It’s 2017 and London is a city on the edge, fighting for survival in the new carbon rationing era. As ever, Laura Brown is right on the front line charting events with acerbic wit as Europe descends into student revolt, strikes and a bitter water war.
These are revolutionary times, and it’s down to Laura to deal with the big stuff - how to keep her love life under control, her parents chilled out, and that dream of world domination with her band, the dirty angels, alive.
The Carbon Diaries 2015 was one of my favourite books of 2008, but it’s sequel The Carbon Diaries 2017 fell a little short for me.
I loved the fact that the novel was Laura’s diary; I really like the idea of reading someone else’s diary. (Not that I ever would, of course…) The entries were interspersed with texts, emails, photos and newspaper clippings which brought Laura’s world to life. However, as it is written as a teenager’s diary, there was lots of slang and abbreviations. And although it makes me sound snobby, it was just so irritating! I suppose it is pretty realistic, though.
For me, The Carbon Diaries 2017 didn’t really start until the dirty angels began their French tour. Then the action really kicked off. But before that it just seemed to be plodding along, even with all the drama, and moved at a pretty slow pace. Then again, the hilarity of Kieran throughout the novel kept me going.
Novels like this often freak me out. The future that Saci Lloyd has envisioned is a scarily plausible one of for the UK. I just hope that the idiot in charge of our country don’t impost carbon rationing. They should read this book first; it’d definitely change their minds! Protests, riots, poverty, squalour, water wars, extremist parties taking power and impossible taxes. Chaos, basically. The Carbon Diaries 2017 made me very grateful that I was curled up in bed reading a book instead of on the front-line of a revolution with Laura!
I did end up enjoying The Carbon Diaries 2017, though not as much as the first book, and I hope that I get to read more from Laura Brown in the future.
For my 2010 100+ Reading Challenge
Sophie
Posted by So Many Books, So Little Time at 09:00
Email ThisBlogThis!Share to TwitterShare to FacebookShare to Pinterest