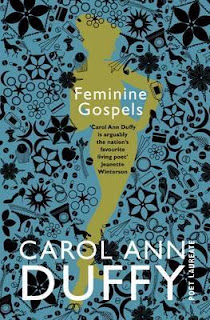 Synopsis
In Feminine Gospels, Carol Ann Duffy draws on the historical, the archetypal, the biblical and the fantastical to create various visions – and revisions – of female beauty. Simultaneously stripping women bare and revealing them in all their guises and disguises, these poems tell tall stories as though they were true confessions, and spin modern myths from real women seen in every aspect – as bodies and corpses, writers and workers, shoppers and slimmers, fairytale royals or girls-next-door.

Mini-Review
I had incredibly high hopes for Feminine Gospels after loving Duffy’s poetry way back at GCSE, but I was actually a little disappointed. While I admired the poems, I never felt that I really knew what anything was about and I felt no emotional connection to any of the poems. As I've enjoyed Duffy in the past, I'm going to give another of her collections a go before I make my judgement as I do love the themes of re-written history, feminism and female strength in Feminine Gospels. 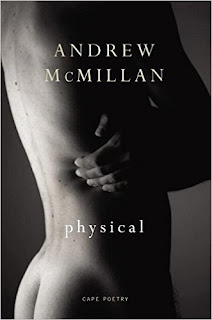 Synopsis
Raw and urgent, these poems are hymns to the male body – to male friendship and male love – muscular, sometimes shocking, but always deeply moving. We are witness here to an almost religious celebration of flesh: a flesh vital with the vulnerability of love and loss, to desire and its departure. In an extraordinary blend of McMillan’s own colloquial Yorkshire rhythms with a sinewy, Metaphysical music and Thom Gunn’s torque and speed – ‘your kiss was deep enough to stand in’ – the poems in this first collection confront what it is to be a man and interrogate the very idea of masculinity. This is poetry where every instance of human connection, from the casual encounter to the intimate relationship, becomes redeemable and revelatory.

Mini-Review
I have mixed feelings about this collection. On one hand, I love the vivid emotion and the feel of the poems, but I also didn’t 100% get everything that Andrew McMillan was trying to say. But I think that’s a fault of my own – I need to remember that as long as I feel something about a collection then it’s mostly a success.

And I did feel for Physical. The poems themselves have no punctuation, instead relying on word and line spacing and it just gives the whole collection this sense of an uncontrolled outpouring of emotion and the way that maleness is explored in unlike anything I've read before. It’s unpretentious and honest and achingly, achingly sad. This is definitely a collection I can see myself re-reading, and one that I think will benefit from that. 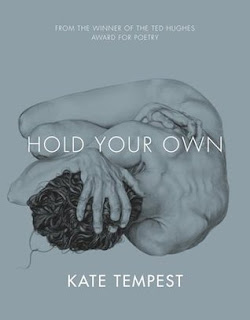 Synopsis
Kate Tempest’s first full-length collection for Picador is an ambitious, mmulti-voiced work based around the mythical figure of Tiresias, this four-part work follows him through his transformations from child, man and woman to blind prophet; through this structure, Tempest holds up a mirror to contemporary life in a direct and provocative way rarely associated with poetry. A vastly popular and accomplished performance poet, Tempest commands a huge and dedicated following on the performance and rap circuit.

Mini-Review
Taking inspiration from the ancient myth of Tierias, Hold Your Own talks about everything we experience in life via a sharp, observant and modern eye and it’s completely brilliant. There is so much power in Tempest’s words and ideas and themes, lots on sexuality, feminism, school and society that sucker punch you with its simple truth. This is a collection I’ll be reading and re-reading over the years, I just know it. I now have a desperate need to read everything Kate Tempest has ever written. Beautiful.