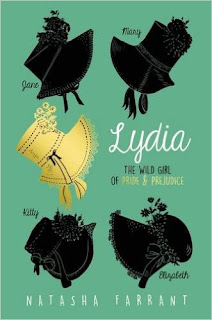 Other Titles by this Author: The Things We Did For Love, After Iris, Flora in Love, All About Pumpkin, Time for Jas

A spirited, witty and fresh reimagining of Jane Austen’s Pride and Prejudice. Lydia is the youngest Bennet sister and she's sick of country life – instead of sewing and reading, she longs for adventure. When a red-coated garrison arrives in Merryton, Lydia’s life turns upside down. As she falls for dashing Wickham, she’s swept into a whirlwind social circle and deposited in a seaside town, Brighton. Sea-bathing, promenades and scandal await – and a pair of intriguing twins. Can Lydia find out what she really wants – and can she get it?

I’ve had a bit of a Pride and Prejudice year with my first re-read since I was 17 and Curtis Sittenfeld’s brilliant Eligible, and Lydia was the perfect addition.

Lydia is a character that I've never fully got on board with, either in adaptations, the book itself or the many re-tellings and re-imaginings I've read over the years, until Lydia. I finally got her. She stopped being the annoying younger Bennet sister who caused trouble and put her sisters’ futures into jeopardy and become someone unjustly disregarded by everyone as silly and left out by her older sisters. Lydia became likeable and sympathetic and it’s made me want to re-read Pride and Prejudice again with that new perspective.

As Lydia wrote of her adventures and related the parts of Jane and Lizzie’s stories that I’m so familiar with I got little buzzes of happiness, but I was eventually overcome with curiosity as to how this new dynamic to Lydia’s story would incorporate with what I knew. I loved seeing Brighton – a city I’m very familiar with – come to life in the late 18th century and the reflections of what was happening back in Longbourn, but it was even nicer to see Lydia grow and change during her time by the sea. I really loved the spin that was put on that time that we never really saw in the original novel.

Natasha Farrant took a few takes on Austen that we’d actually discussed in the past and made them strong features of the novel which I really liked. Mrs Bennet’s hysteric need to marry her daughters was out of fear of them ending up destitute – she’s not entirely silly; Wickham’s motives, though wrong, were understandable; and the fact that marriage really was all about money in Austen’s time – Jane and Lizzie were incredibly lucky to love the rich men they married.

But most of all, I loved that Lydia’s ending felt so different to P&P – it felt worthy of the character I fell in love with during this novel. Marrying Wickham almost seemed like a punishment for her actions in Austen’s book, something that would inevitably end in unhappiness, but Lydia got her happy ending in Lydia which was really lovely to see. I finished this book with a great big smile on my face and you really can’t ask for more than that.

Lydia is a fresh, affectionate and respectful take on Pride and Prejudice and really manages to keep Austen’s original at its heart.