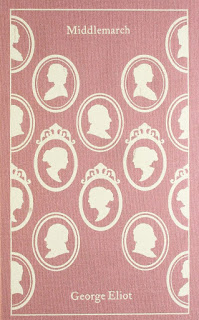 Originally published in 1871-2 by William Blackwood and Sons

My edition: the ridiculously pretty Penguin Clothbound Classic, though I did listen to around a third of the novel on audio

WHEN I Discovered This Classic
Middlemarch is, once again, a novel that I don’t remember not knowing about. It’s a title banded around as the epitome of the sprawling Victorian novel, the hugely intimidating classic that you’ll never read and one of the most important books in English literature.

WHY I Chose to Read It
I came across Bex from Ninja Book Swap/An Armchair by the Sea announcing on Twitter that she would be hosting a 6-week Middlemarch readalong (you can look back on our thoughts with #EliotAlong) and I spontaneously decided to join in! I knew it would be unlikely I would get around to reading it on my own so I ordered a copy of the book and got ready to join in!

WHAT Makes It a Classic
Middlemarch is often regarded to be one of the finest pieces of English literature and was a favourite of Virginia Woolf’s who in 1919 said it was “one of the few English novels written for grown-up people”. It’s praised for its intelligence, characters, themes and social awareness.

WHAT I Thought of This Classic
Middlemarch is a long, involved and complicated novel, or it feels like it at first. There are a lot of characters to meet and learning how they are connected and the complex relationships between the inhabitants of Middlemarch is daunting, but once you’re in, you’re in.

Though we spend time with a lot of characters over the course of the novel, we mostly focus on Dorothea (naïve, young, beautiful), Rosamund (rich, beautiful and shallow), Mr Causabon (a mean, selfish Reverend), Fred Vincy (charming, fumbling and a gambler) Ladislaw (intelligent, romantic and idealistic) and Lydgate (a doctor with revolutionary ideas).

Over the course of the novel we see them question, succeed, fail, love, hate, marry and grieve. Middlemarch is definitely the broadest look at rural Victorian life I've ever read and it was fascinating to see the scope extend beyond the upper echelons of society into the middle and lower classes across all professions, especially looking at the women in those situations.

George Eliot was an early feminist and it’s obvious from the get go. Dorothea and Rosamund are incredibly complex characters, and honest ones too. Neither woman is always likable, always admirable or always hated which is a common pitfall in the novels of this period, in my opinion. Marriage is explored extensively and it was so good to finally see beyond the proposal of marriages built on superficial appreciations and chaperoned meetings when you’re trying to impress. I think the only other time I've come across this is in The Tenant of Wildfell Hall. Watching the male characters, particularly Causabon and Lydgate, fully realise that their wives are people with opinions, feelings and ideas is a wonderful thing, but also a sad one.

I don't think I'll ever stop loving the Penguin Clothbound Classics. Ever.
A photo posted by Sophie (@solittletimeforbooks) on Jul 17, 2016 at 2:39am PDT

But Eliot didn’t just delve into the psyches of the female characters, she let us truly get to know the men too. Causabon is basically an arse and I hated him – selfish, manipulative, immovable – I pitied Dorothea so very much. The way the men interacted with women once they truly knew them was super interesting, especially when faced with a woman being right and the man being wrong. The dynamics between the sexes in Middlemarch is something that could be discussed for weeks and still only scratch the surface. But what I loved most about the male characters was as aspect of Will Ladislaw’s tale: he didn’t know what he wanted to do with his life. It’s reassuring to know that feeling isn’t a new one. Too often in the Victorian novels I’ve read so there’s no discussion about career aspirations, what the men want from their lives (other than the heroine) and I really enjoyed watching that aspect of Will’s story unfold.

The struggle of finding someone to happily spend your life with also feels like a modern one, but once again, Eliot brought the 1830s in to my world and the world of my family and friends with the universal struggles of marriage, love and friendship. It was almost humbling to see how little people have changed in nearly 200 years and, quite frankly, it made me rather grateful that I'm a woman in 2016 rather than 1830.

After over 800 pages, I felt I knew these characters very, very well. Some I grew to hate and some I grew to love, but I won’t be forgetting any of them any time soon. This novel is daunting, it’s complicated and some bits are a tad dry, but it is so worth a read. I thoroughly enjoyed Middlemarch and I'm beyond glad I got to experience it.

WILL It Stay a Classic
100%. Only last year it was voted by critics and scholars as number one in the BBC’s poll of ‘The 100 Greatest British Novels’!

WHO I’d Recommend it To
- Fans of Elizabeth Gaskell, particularly North and South.
- If you’re interested in what happens after the proposal and wedding in 19th century classics.
- People who like the idea of Dickens and his books, but don’t actually like them.