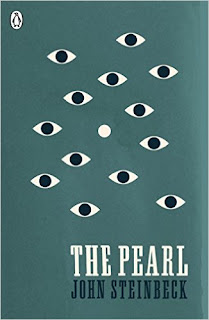 Originally published in 1947 by The Viking Press

My edition: The new YA Originals paperback from Penguin.

WHEN I Discovered This Classic
This is actually a title that I didn’t know about until I was offered the chance to review a few of the YA Originals.

WHY I Chose to Read It
I read Steinbeck’s ‘Of Mice and Men’ way back in Year 9 and I hated it. Completely and utterly. It’s been around 10 years since then and I figured it was about time I gave him another shot.

WHAT Makes It a Classic
‘The Pearl’ is a fable about the evils of greed and the danger of the poor rising up and threatening the status quo.

WHAT I Thought of This Classic
I’m just going to come out and say it: I really didn’t like ‘The Pearl’. In fact, if it had been any longer that it's 115 pages I wouldn’t have finished it.

Kino is a poor Mexican pearl diver who finds the Pearl of the World - huge pearl worth thousands. Kino is blinded to the threat and danger of the pearl by the promise and glory of what it can achieve for him.

As I mentioned, this novel is a fable and it felt very heavy handed. The story and writing was very simplified, the message obvious and verging on preachy and I hated the oppressive feel of the message behind Kino’s story. But aside from that, I found it kind of boring. Being a fable, the general direction of the story and the journey of the characters was expected and there were no real surprises in the narrative.


Look how beautiful these Penguin Originals are! This new list of 17 pioneering YA classics has been given gorgeous new covers and a new lease of life. And I LOVE them. Which should I read first?
A photo posted by Sophie (@solittletimeforbooks) on Jul 19, 2016 at 3:16am PDT

One of the things that I remember not liking about ‘Of Mice and Men’ is that the character of Curley’s Wife is just his wife – she doesn’t even have a name. She’s a device without a personality, agency or depth, and I found the same problem with Kino’s wife Juana. She is simply there to function as a conscience to Kino, to refute his ideas about the pearl and she is constantly derived and squashed down by her husband. It made me ragey and lose all sympathy I had for Kino and his plight.

It's safe to say that John Steinbeck isn’t for me and I won't be giving him another try.

WILL It Stay a Classic
Probably. Steinbeck is seen as a master of American literature and he continues to be studied across English classrooms. Poor kids.

WHO I’d Recommend it To
- Honestly, I’m really not sure. Unless you’re a fan of Steinbeck already, I don’t really recommend ‘The Pearl’.