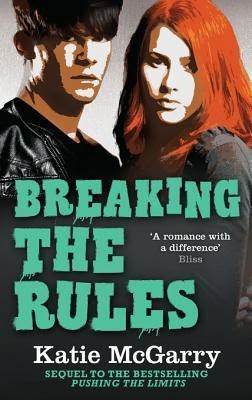 Other Titles by this Author: Pushing the Limits, Dare You Too, Crash Into You, Take Me On

I thoroughly enjoy Katie McGarry’s novels: they’re fun, sexy and heartfelt, and I was so excited to hear that her fifth book would take us back to Noah and Echo where I started with her books.

Breaking the Rules picks up immediately after the ending of Pushing the Limits with Noah and Echo on a summer road trip visiting art galleries across the country to spread Echo’s name and her art. But it’s also some quality Echo and Noah time to work out their issues and enjoy each other before the pressure of college. There were lots of issues that came between them on their trip, both past and present, but mostly ones we saw in their beginning: Noah’s history with other girls, Echo’s scars, her relationship with her mum, their fear of losing each other. All familiar, right? The biggest new issue for Echo was sex.

Echo was terrified and really quite reluctant to give that part of herself to Noah and I thought that was a really strong, genuine and important aspect of first love to be demonstrated – you rarely get that in YA, surprisingly. But that dynamic in their relationship soon started to bother me a little. Noah seemed a little pushy and there was a particular line somewhere that referenced that Noah had gone too far and she had been unwilling or something along those lines – I think it was in reference to Echo’s clothes being removed. It made me pretty uncomfortable and that feeling stayed every time there was even slight intimacy, especially after they finally had sex and Echo asked Noah if she had to do it again. Red alert, right there. And an unhealthy portrayal of what should have been a big and positive experience for Echo.

While on their rocky ride I was reunited with Beth of Dare You To and Isaiah of Crash Into You. As Breaking the Rules is set between Pushing the Limits and Dare You To, we got to see Beth and Isaiah from before we really got to know them in their own novels. It was really interesting to see their relationship close up and how different they were before Ryan and Rachel came on the scene. Beth was a serious mess and it’s so nice to know that she got out of that dark pit and was able to pick herself up and start her life again.

Though I had a (pretty serious) niggle, I enjoyed Breaking the Rules and I’ll be sad to see this companion series end. Though after the sneak peek of Katie McGarry’s new series, I’m definitely excited for Nowhere But There.