After Us, Amber Hart 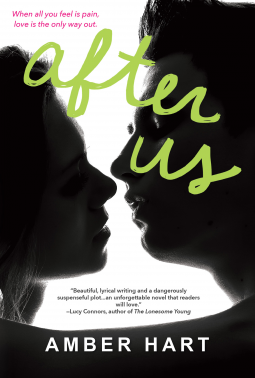 Other Titles by this Author: Before You

Melissa smiles. She flirts. She jokes. But she never shows her scars. Eight months after tragedy ripper her from her closest friend, Melissa is broken. Inside her grows a tumour, fed by grief, rage, and the painful memory of a forbidden kiss.

Javier has scars of his own: a bullet wound, and the memory of a cousin shot in the heart. Life in the States was supposed to be a new beginning, but a boy obsessed with vengeance has no time for the American dream. To honour his familia, Javier joins the gang who set up his cousin’s murder. The entrance price is blood. Death is the only escape.

These two broken souls could make each other whole again – or be shattered forever.

Our time will come. And we’ll be ready.

I was a little worried that After Us would be the a rehashed version of the story of its predecessor, Before You, and while it was to a certain extent, I also thought it was a lot better.

Hart’s writing was as peppered with clichés, plot-wise and the prose itself, as I found Before You to be, but as I was expecting that I was able to just overlook it and I soon became accustomed to them. I think that with another solid edit those could have been tamed and altered a little to feel a little more authentic and it would have pushed it from an easy read to a solidly written and enjoyable contemporary.

The characterisation of Javier and Melissa was a lot stronger than Diego and Faith’s, for me. There was more history, more depth and a much more believable connection between them; I just fully bought into it in a way that I didn’t with Diego and Faith. Their chemistry leaped off the page and I was itching for them to get over their obstacles and just kiss already! I did feel a little uncomfortable with a particular spoilery moment where Melissa uses the reason behind her scars to try and guilt Javier into something – it made me squick. And off of the back of that, I really had the impression that Amber Hart throws around trauma all willy-nilly just to make her characters look deeper and more flawed and it just doesn;t always come across as authentic.

And yet, even with all these qualms, I still really enjoyed reading After Us. It’s always nice to switch-off with a quick, light romance, and I’ll definitely keep my eye out for more by Hart.

Thanks to K-Teen and NetGalley for the review copy.