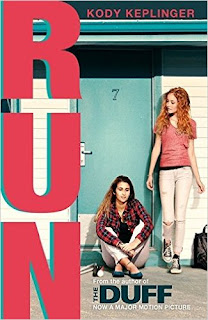 Other Titles by this Author: The DUFF, A Midsummer’s Nightmare, Shut Out, Lying Out Loud

What risks would you take to save your friends?

Bo Dickinson is a girl with a wild reputation, a deadbeat dad, and an alcoholic mom. Everyone in town knows the Dickinsons are a bad lot, but Bo doesn’t care what anyone thinks.

Agnes Atwood has never stayed out past 10pm, never gone on a date and never broken any of her parents’ overbearing rules. Rules that are meant to protect their legally-blind daughter, but Agnes isn’t quite sure what they are protecting her from.

Despite everything, Bo and Agnes become best friends. And it’s the sort of friendship that runs more deeply than anything else. But when Bo shows up in the middle of the night, police sirens wailing in the distance, Agnes is faced with the biggest choice she’s ever had to make. Run, or stay?

I’m a huge fan of Kody Keplinger’s books, and while Run was as easy and enjoyable to read as her previous novels, it just wasn’t as immediately engaging as I was expecting.

Run is set in rural Kentucky and has an immediately different feel to Keplinger’s other novels. Mersey is a small, poor, religious town and the Southern accents are clear even through the narration. We don’t really have an English version of the small-town American South so I find this setting endlessly fascinating. The judgements and strictness of it baffle me. I really felt for Bo and Agnes suffocating under the pressure of their home town.

I loved the intensity of Bo and Agnes’s friendship. It’s that heady best-friendship you develop in your teens that hurts even more than a romantic break up when it fractures. Keplinger writes the agonies of it perfectly. I often found myself not especially motivated to pick this back up and it was only wanting to see Bo and Agnes learning from each other and teaching each other that kept me going.

Agnes has the same condition as Kody Kepliner herself and it was fascinating to read about. I don’t think I've ever read about a legally blind character before and it was super interesting to see how day-to-day life worked for Agnes. It had never occurred to me before how over-protective parents would be of their blind child, the daily struggles at school and the idea of you being a ‘burden’ on your friends. But I loved that it wasn’t written that way – it’s not something to be pitied, and it's not all that Agnes is.

Run didn’t blow me away as much as Kody Keplinger’s previous novels have, but it was still an easy, enjoyable read about friendship, family and the thrill of freedom.