Blog Tour: Did I Mention I Miss You?, Estelle Maskame 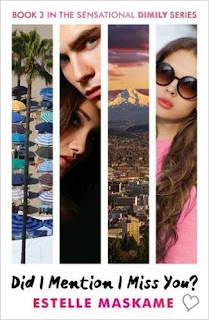 A year has passed since Eden last spoke to Tyler. She remains furious at him for his abrupt departure last summer but has done her best to move on with her life at college in Chicago. As school breaks up for the summer, she's heading back to Santa Monica, but she's not the only one who decides to come home...

Having been left behind to deal with the aftermath of their bombshell revelation and a family torn apart, Eden has no time for Tyler when he reappears. But where has Tyler been? And is she as over him as she likes to think? Or can Tyler and Eden finally work things out, despite their family and against all the odds?

My love for this series is no secret, and I was so excited for the finale of Tyler and Eden’s story – it managed to exceed my super high expectations.

We pick up nearly a year after the dramatic end of DIMINY and the aftershocks are still violent: Tyler is still gone, Eden is angry, confused and miserable, and the whole family is in tatters. I was expecting there to be drama, but wow, I wasn’t expecting how horrible Eden’s life had been since people started finding out. I loved how extreme and forbidden it made everything that Tyler and Eden had felt for each other seem again, it jumped back to the feeling of DIMILY. It didn’t think it could get any more tense, and then Tyler came home.

I haven’t seen a character with an arc like Tyler’s for a long while. He grew, developed and matured so much over the trilogy that he was nearly a different person by the time I turned the final page of DIMIMY, but he was still 100% Tyler. Though not as extreme as Tyler’s, Eden also changed too. I love how she came to learn more about her parents and almost began to see them as people as well as her mum and dad. The continuous revelations and tension in Tyler and Eden’s family, and between themselves, made DIMIMY compulsive reading. I would have read it all in one sitting if I could!

We were in Santa Monica for book one, NYC for book two and DIMIMY takes us to Portland. I don’t really know much about Portland, in fact, I've never really given it much thought so it was cool to learn about a new American city outside of the typical settings in YA. I kinda fell in love with it. It almost sounds a little like an American version of Brighton (and I love Brighton) – I just want to go exploring! These books always give me serious wanderlust.

Did I Mention I Miss You? is the perfect ending to a brilliant series. Though I’m rather gutted to see Tyler and Eden go, I loved how their story ended. This will be a trilogy I’ll read over and over again.

Thanks to Black and White for the review copy.

Make sure to check out the rest of the stops on the blog tour!