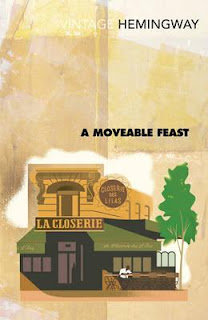 Originally published in 1964 by Scribner’s

WHEN I Discovered This Classic
Though Ernest Hemingway is of course an author whose name I've heard a lot, I’d never heard of this short memoir of Hemingway’s time in Paris in the 1920s until Will from the Vintage Vlog read it for this challenge earlier in the year. Happily, I won a copy!

WHY I Chose to Read It
There’s just something about 1920s Paris that is endlessly appealing. Writers who will soon be megastars scribbling away in shabby chic coffee shops, enjoying decadent luxuries or struggling with the expenses of Paris as a writer – it all has such an atmosphere and I was really curious to see how Hemingway tangled with the other famous names that made the city home during the 20s.

WHAT Makes It a Classic
It’s a glimpse into the early life of one of the most famous, most troubled and most read American authors of the 20th century in his own words. And the literary world at that time was fascinating.

WHAT I Thought of This Classic
I have to admit that I went in to A Moveable Feast with low expectations, albeit optimistic ones. I'd loved what I'd heard from the Vintage Vlog and I loved the sound of everything that Hemingway writes about in his memoir, but I'd also heard a lot about Hemingway himself that didn’t sound up my ally. He was fascinated by fishing and wrote a lot about war (he was a war journalist) and those topics have never, ever interested me, and I’d also heard that he was rather mean, grouchy and misogynistic.

And he is grouchy and mean, but it doesn’t come across as a necessarily terrible thing in A Moveable Feast. I definitely wouldn’t have wanted to spend time with him myself, but his interactions with the people around him were really quite funny, and rather sad too. I especially loved how much he despaired over F Scott Fizgerald. What a character! But he also spent time with TS Eliot, Ezra Pound, Gertrude Stein, Wyndham Lewis, James Joyce and Ford Madox Ford and it just blows my mind a bit. It sounds stupid, but it made me realise that these legends of art and literature were real, actual people and I just can’t.

Hemingway tells the stories of how these people’s lives entwined with his own in such simple prose that when I first started reading I thought it was too simple, even mundane. As I carried on and got used to his style and the world he was writing about, I became unexpectedly entranced by it. I came to see the subtle beauty in his prose and I loved reading about his own reflections on refining his style and his attempts to strip back his writing and stories to the core. It’s interesting to wonder how I would have felt about his prose if I had introduced myself to it via one of his novels.

I’m so curious that I’ve actually ordered a copy of The Old Man and the Sea – it won the Pulitzer and contributed to Hemingway being awarded the Nobel Prize for Literature. It was also the last big fiction work from his before his death ten years later. It’s about a fisherman, though, so again, I have major doubts. I’ll keep you posted!

WILL It Stay a Classic
I think it will definitely stay under the radar, popular with either die-hard Hemingway or Fitzgerald fans and those fond of memoirs of Jazz Age Paris, but it’ll definitely stick around.

WHO I’d Recommend it To
- People who want an introduction to Hemingway but are intimidated by his novels.
- If you have any interest in Jazz Age Paris, this is for you.
- Want a glimpse at the infamous relationship between Zelda and F Scott Fitzgerald? A Moveable Feast gives you a look from a really interesting angle.