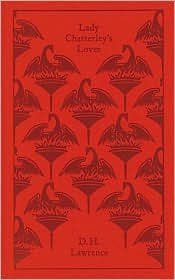 My edition: The rather lovely Penguin Clothbound Classics hardback

WHEN I Discovered This Classic
Like with a lot of classics, I can’t recall a distinct moment of discovering Lady Chatterley’s Lover. It's just one of those canonical texts that has always been there.

WHY I Chose to Read It
I watched the new BBC adaptation when they ran a short series of adaptations earlier this year and while I enjoyed it, it felt a bit lacking. Twitter seemed to agree and suddenly floods of praise came in for the novel, people strongly recommending everyone not to be put off a wonderful book by a lacklustre adaptation. I was sold.

WHAT Makes It a Classic
DH Lawrence was writing about and during a time that will continue to fascinate for years and years to come: in between the wars. A time when modernity and tradition clashed, when women were still only beginning to fight the restrictions of society, when the leftovers from before the war feel old and stifling. And on top of that, he throws in lots of sex, scandal and high romance – he was paving the way for a new generation of writers.

WHAT I Thought of This Classic
When Lady Constance Chatterley’s marriage to Sir Clifford turns stale, boring and unsatisfying due to Clifford’s paralysing war injuries, Connie turns her affections to the gamekeeper that maintains the ground of Wragby house.

Lady Chatterley’s Lover is one of the most accessible classic classics I've read this year and I really enjoyed it. If I hadn’t have been reading Middlemarch alongside it (which is a lot tougher to get through!) then I would have sped through this book.

I finished my July #2016ClassicsChallenge read last night and I really enjoyed it! Though I knew DH Lawrence was tried for indecency for this book, I still didn't expect it to be that scandalous. It was! Lots of fun to read.
A photo posted by Sophie (@solittletimeforbooks) on Jul 23, 2016 at 4:47am PDT

I knew very little about the plot or themes of this book outside of the vagaries of the BBC adaptation so I was really interested to see Lawrence exploring the clash between post-war modernity and the leftovers from the old-fashioned Edwardian era. Seeing this reflected both in Clifford and in Mellors in such different ways was fascinating. We learn a lot about the wars in the UK education system, but we rarely look at the non-war related effects on the years between them. Set around 1920, the shock of the war is still evident and it shows up in the disparities between Connie and Clifford and Mellors.

The clash between the times also showed up in the war between the classes and it was really interesting how Connie went back and forth between caring about her status to disregarding it and back again. It is expected for her and Clifford to care, and that’s what they’ve been taught since birth, but for Mellors and his own experiences in the war, his social position is no longer of consequence to him.

Connie and Mellors’ relationship is up and down from the outset, and I wasn’t always 100% on board with it. The first few times they were together, Connie wasn’t really a participant – it almost felt as if she wasn’t really sure she wanted to do anything. But as they got closer and closer, she warmed up and he cooled down. By the end of the book I felt that Connie had forced Mellors into a relationship that he didn’t really want. This weirdness meant I didn’t really connect with the passion and ‘love’ that was continually professed. I was also surprised by how explicit it was!

Though Lady Chatterley’s Lover was written and released in 1928, the full, unabridged version wasn’t published in its entirety in the UK until 1960 when Penguin were famously tried for the obscenity. Even with that in mind, I genuinely wasn’t expecting anything that scandalous. I was wrong! I figured it would be a little suggestive, slightly risqué, but nothing like what I got. I was so shocked at some of the word choices, and the frequency of their use. They’re words I cringe to hear even now, I can’t even imagine the reactions 60+ years ago. But for me, the crudeness of that language took something away from the romance and passion that Connie and Mellors supposedly felt for each other – it just didn’t seem like there was genuine feeling behind their actions. It’s kind of fascinating, really.

This was a perfect introduction to Lawrence and I’m really looking forward to reading more of his work, I only wish I hadn’t stretched it out for so long! I think this is the kind of novel best read in a binge or as quickly as you can – I think Connie’s passion and intensity will be served better that way.

WILL It Stay a Classic
Definitely. It’s accessible and fun, and the legacy of the scandal that this book caused for Lawrence will live on.

WHO I’d Recommend it To
- Lovers of scandal fiction and those not put off by graphic content.
- Readers interested in the period between the wars and the effect on society.
- If you’re curious about early 20th Century exploration of women’s freedom and sexuality.